Taking CLEP Exams in high school is a great way to earn college credit. You study for, you schedule, and you take your CLEP Exam. But what happens if you FAIL A CLEP EXAM!? 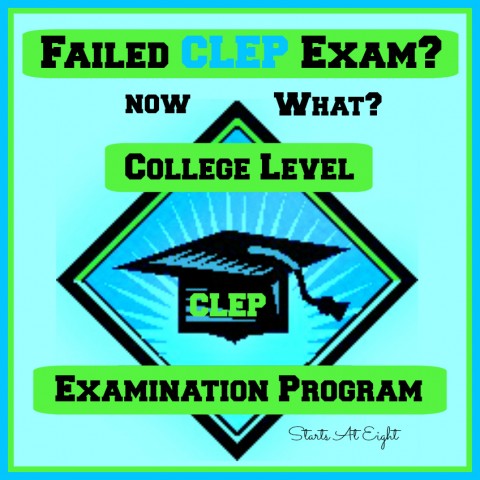 In this CLEP series we have covered many CLEP topics such as:

This time we are going to talk about what happens if you don’t pass a CLEP Exam.

So you have just exited the test center having just found out that you did not pass the exam. Now what?

First and foremost don’t panic! Failing a CLEP Exam is not the end of the world.  While I understand you (or your student/child) might be upset at first, there is no need to panic.

Read more about What Your CLEP Score Means

Having failed the exam, it is time to take a look at why. My guess is that you either didn’t study enough, need to study in a more effective manner, or have some serious test taking jitters to work through.

When it came to my daughter failing her first exam, I already knew what the issue was. I could see it for myself, but knew she wasn’t going to listen to me. I let her take them exam anyways and figured if she failed that would send a louder message than what I could, and if she passed, then maybe my suspicions were wrong.

It turns out I was right. While she only failed by a small margin, she still failed. Like you can imagine, she was pretty upset about it. The good news? She was ready to talk about her poor study habits which I had tried to point out to her previously.

So if you fail, first don’t panic. Then reevaluate your study methods, and test taking abilities. After you have sorted out the cause of why you failed, and found ways to alter this course, move on to step three: Reschedule.

Now that you are over the shock and disappointment of failing, and you have taken the time to reevaluate and adjust what you needed to, the next step is to schedule another CLEP Exam.

There is a waiting period to retake the same CLEP Exam.

From the College Board Website: “As of October 17, 2014, the waiting period is three months. Please note that this policy is in effect only for students who test on October 17, 2014 or after. For students who test prior to October 17, the waiting period to retake an exam is six months. You may not repeat an exam of the same title within three months of the initial testing date. If you retake the exam within the three-month period, your administration will be considered invalid, your score will be canceled and any test fees will be forfeited.”

For rescheduling a CLEP Exam you follow the same procedure as I outlined in How to Schedule A CLEP Exam, minus the first step of needing to find a local test site.

Interested in learning more about earning college credit through a CLEP exam?

Want to know how a CLEP exam differs from AP?  Don’t know what AP is?

Others posts in this College Credit by Exam Series: