The winter weather has kicked itself into high gear here over the past couple of weeks.  We have the pleasure of living in a snow belt where we get extra snow due to the lake effect.  This year Chloe has taken a particular liking to being out in the snow.  Every chance she gets she dons her snow gear and rushes out.  Some days it is to clear snow, some times to try and erect a snowman or an igloo, other times to bust out her sled.  Last week Poppy was here in the evening and we were graced with an outpouring of snow, so out she goes into the cold, blustery weather.  Before you know it all of us are outside and in the middle of the street with sleds.  Joey and Poppy were “sled racing” with Chloe, Jayden and Ava all on sleds down the middle of our street.  We spent more than an hour lugging them up and down the street on sleds.  All the while Ava is digging her hands into the snow to add that extra “drag” on the sled!  I have to admit, that even I, who hates the snow, had a fun time that evening with all of us outside playing in the snow. 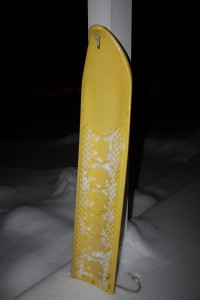 Only a few days later we were graced with yet another outpouring of snow.  Chloe could not wait to get out and enjoy the fluffy balls of snow fluttering down everywhere!  This time she added a new twist to her snow activities.  After helping her dad clear the driveway, she dragged out the sled that we have loving deemed “the banana peel”.    It has been in my parents’ repertoire of sleds for as long as I can remember.  When you look at the picture you will certainly understand why it was deemed “the banana peel”.  Instead of sledding down the driveway with it, or having Joey pull her around laying down on it, for whatever reason she decided to stand on it.  After being out for what seemed like forever to me, Chloe comes running in telling us to watch her out the front door.  As my mom and I peer through the quickly fogging over glass door, we see Chloe hop on with two feet to the top of “the banana peel”.  Joey then precedes to pull her around the street, back and forth and round and round.  When I get tired of wiping off the door so I can see her, I shut it and go back to playing with Jayden and Ava.  Of course, Chloe’s fun did not end there.  Instead, Joey encouraged her to try taking “the banana peel” down the driveway on her feet.  Apparently, as he tells us later in the kitchen, he was not surprised that she was good at balancing on it.  After all, she is a gymnast and spends a good chunk of her life on a balance beam!

Seeing as she was doing so well on “the banana peel”, Joey really wanted to see how she would do with a snowboard.  He likes the idea of her having something “different” to do other than her gymnastics.  So we all know that when Daddy gets something in his head, he can’t get it out.  Onto the internet he goes!  Many of the boards are expensive and require other things like bindings and boots.  There are however, “junior” boards that do not require special boots and bindings.  ToysRUs has them online.  Needless to say, the next day after trying out “the banana peel” on a local hill, Daddy and Chloe head out on a hunt for a reasonably priced snowboard for her.   An hour or so later they come back empty handed and clearly unsatisfied.   After lunch they head back out to the local sledding hill with “the banana peel” in hand.  While they were there they had come across a boy on a snowboard which they thought would work for Chloe.  His dad said they purchased it at Dick’s Clothing and Sporting Goods.  Joey was not convinced that he would find such an animal there, but he obviously wanted to try! 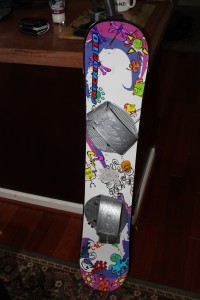 After dinner we all pile into the truck and head out to Dick’s Clothing and Sporting Goods in search of this illusive snowboard!  Needless to say much store wandering ensued before we found any snowboards.  To Chloe and Joey’s dismay all we could find were the expensive ones.  More store walking follows as Joey searches for someone to ask.  Yes, gasp!  A man is looking for someone to ask.  That bears repeating.  I did say, a MAN is looking for someone to ask.  The woman he asks insists that they are over with the expensive boards, so back we go!  Ava is getting amped up and into everything by now so she and I leave the store and go wander the mall.  Lifetimes later Jayden pokes his head out and tells me to come in.  It turns out that after asking another person….double gasp!……Joey finally found the “junior” boards out in the vestibule at the opposite end of the store.  Seeing as this was all so exciting Jayden tried to jump on the band wagon as well.  This from a child who doesn’t stay out in the snow more than a few minutes at a time.  We squashed that bug and walked out with what was called a “Graffiti” Board for Chloe. 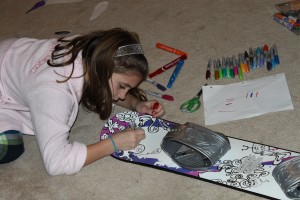 Being a “Graffiti” Board means that Chloe gets to use permanent markers and decorate the board herself.  It may look like a small task, but when your ten your old is asking you every stroke of the way what color she should use….it gets a LOT old!  Well past bed time she is still not done.  Unhappily off to bed she goes!  Early in the morning the decorating ensues again!  I know I went to bed and got up hoping that all the hype about this board and snowboarding was not going to be more exciting than the act of snowboarding itself! 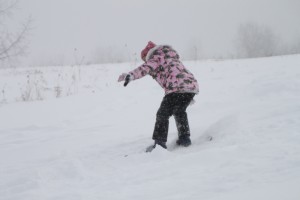 Luckily for me, it wasn’t!  Chloe and Joey trotted off to the local sledding hill and experienced her first snowboarding adventure together!  It is my understanding that in the beginning the going was rough and she was frustrated, but she came home happy and anxious to do it again!