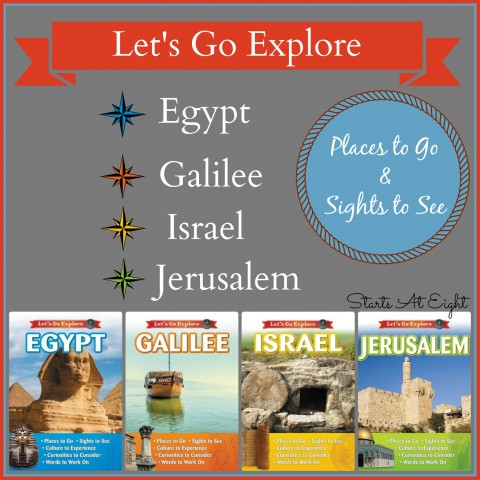 In these full-color picture books, the Let’s Go Explore Series, lets young readers travel to the holy land of Egypt, the Nile and Jordan Rivers, the city of Jerusalem and more. Complete with photographs, maps, vocabulary call-outs, fun facts, and more, this is a great resource for young readers. Read about the Biblical significance and history of Israel, Egypt, Jerusalem, and Galilee, as well as current and curious information about foods, clothes, places of interest, and other pertinent facts of interest in these places.

Let’s Go Explore – Egypt: The first thing you learn is that Egypt actually spans two continents!  From there learn about the Nile River and Suez Canal and the large impact each has had on the culture and history in Egypt.

Pyramids, The Great Sphinx, hieroglyphics and more fill this book with geography, history, and interesting facts both ancient and current.

Did you know that most Egyptians are Muslim? Learn a little about the Muslim religion.  For instance, they worship in buildings that are called mosques.

Learn about coastal living and hear about the Sermon on the Mount, believed to have taken place on the northern part of the Sea of Galilee.

See in pictures and words a progressions and history of the use of different tiles throughout history.

Let’s Go Explore – Israel: Israel and Egypt share a border placing Israel square into Asia and along the Mediterranean Sea.

The Coastal Plain along the Mediterranean Sea is only 166 miles long but hold more than half of Israel’s population.

Israel is home to places like Jerusalem, the Dead Sea, the Jordan River, the Negev desert region and so much more.  Beyond its diverse landscapes, Israel is the only country where the majority of its citizens are Jewish.

Let’s Go Explore – Jerusalem: Jerusalem is a city in Israel.  Once called the “Old City” it is one of the only town in the world that has not been abandoned.

Learn about the many gates to the “Old City”, as well as the significance of the Temple Mount.

Each of these books contains a glossary of new terms to be learned.  For instance in this Jerusalem you will learn the term Sepulchre (or sepulcher), which is a burial chamber.  In Jerusalem you can find the Church of the Holy Sepulchre.

I can’t say enough about the quality of these books in the Let’s Go Explore Series from Zondervan.

From the stellar images to the interesting information and facts that are just enough but not too much for the elementary students.  Even for older students there are facts to be gained from these books!  I enjoyed reading and learning right along with my daughter.