3 Helps for Learning the Spanish Alphabet 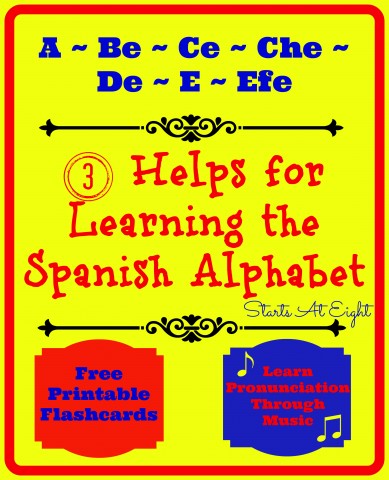 I should probably start by telling you that I do not speak any Spanish. I will be learning the Spanish alphabet and any other Spanish right along with our daughter.

One thing that I find important for me to learn a new language like this is to be able to both hear the words pronounced as well as to see them phonetically spelled out in terms of the English sounds. Therefore the first resource I created is a set of printable flash cards of the Spanish alphabet that have the Spanish letter as well as the word phonetically spelled out.

Click to get my Free Printable for Learning the Spanish Alphabet!

Ways to use this printable while learning the Spanish alphabet:

Along with being able to see the written word it helps to be able hear the correct pronunciations.  At 123teachme you can find a game called Click’N’Say Letters where you can see it written, and click on it to hear it pronounced correctly.  Using this to hear it, and then repeat it is a great way to be confident in the pronunciation of the Spanish alphabet.

Other Spanish Resources I Love: