Thanksgiving is a time for giving thanks, a time for pilgrim talk, turkey talk, and big family dinners. Why not spend some time with some of your children’s favorite characters with these 10+ Character Thanksgiving Books! 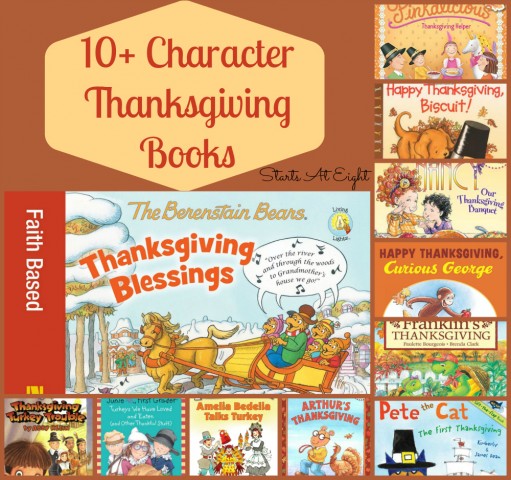 – The Berenstein Bears head out on a sleigh ride to Gran and Gramps for a Thanksgiving Feast! Along the way Father Bear talks about all the things they have to be thankful for. What is wonderful about this story is that it incorporates the traditional Thanksgiving feast with all the trimmings in with a more in depth list of things to be thankful for. Extending beyond food and family to include our freedom of religion, the peace our soldiers have fought for, and even the “work and play” we enjoy here.

In true Berenstain style they exude family values and togetherness, and even include an old song, “Over the river and through the woods.” Then as an added bonus there are stickers included as well! They include many of the images from the book itself. I think this is a great addition to any Thanksgiving book collection.

(I was given a copy of this Berenstain Bears book to review. However my opinions are my own and I was not required to post a positive review. Your experience may vary.)

– Today is Thanksgiving and George is so excited! He loves everything about the holiday—from the parade with music, jugglers, and big balloons to the delicious turkey shared with family and friends. But even on Thanksgiving the curious little monkey manages to stir up some trouble! Follow George through his Thanksgiving adventures with the short poems in this board book. The fun, tabbed pages are perfect for little fingers!

4.  Junie B., First Grader: Turkeys We Have Loved and Eaten (and Other Thankful Stuff)

Junie B., First Grader: Turkeys We Have Loved and Eaten

It’s Thanksgiving time and Room Nine is getting ready for their very own Thanksgiving feast! There’s even a contest to see which room can write the best thankful list. The winners will get a pumpkin pie! Only it turns out being thankful is harder than it looks. Because Junie B. is not actually thankful for Tattletale May. Or squash. Or scratchy pilgrim costumes. And pumpkin pie makes her vomit!

Join Nancy and her family as they celebrate Thanksgiving.There is a gigantic turkey, Grandma’s secret stuffing, green beans, and authentic cranberry sauce, the kind that doesn’t come out of a can. And desserts? There are almost too many to count!

Amelia Bedelia volunteers to direct the third-grade Thanksgiving play, with the help of handyman Cousin Alcolu. The ditzy housekeeper manages to misinterpret every homonym and slip on every pun, creating a hilarious pageant that is wildly applauded by both children and adults

Arthur has been picked to direct his school’s Thanksgiving play-and cast the roles. But all his friends want to be star, and no one wants to play the Turkey! What will Arthur do?

likes everything about Thanksgiving, from eating pumpkin-fly pie to making cornucopias. But what he likes best is having his Grandma and Grandpa share the holiday with him and his family. This year, however, his grandparents are traveling abroad. Thanksgiving just won’t be the same without guests around the table, so Franklin decides to invite some friends for dinner. What a nice surprise it will be for his parents. Only Franklin’s mother and father have the same idea, and on Thanksgiving Day all their friends show up for the festivities! With no more room in the house, where will the holiday meal take place?

9. Pete the Cat – The First Thanksgiving

Pete the Cat: The First Thanksgiving

Starring in the school Thanksgiving play would make even the coolest cat nervous. But when Pete the Cat gets onstage, he makes learning the story of the first Thanksgiving fun. With thirteen flaps that open to reveal hidden surprises

– Biscuit’s owner, a little girl, teaches Biscuit what the Thanksgiving holiday is all about. Biscuit puts the ideas he learns into action by interacting throughout the story with the little girl, Daisy (the cat), and Grandpa and Grandma who come over for Thanksgiving dinner. In this book the flaps that open to reveal what Biscuit is doing are super fun and engaging for younger ones!

– It’s a Thanksgiving disaster for Freddy Thresher! When his first-grade class begins planning the annual Thanksgiving play, everyone will have a role. Freddy’s friends are all happy to be Pilgrims and Indians, but there is one part that nobody wants to be-the turkey! Freddy hopes he won’t get the part, but-you guessed it-he gets the unlucky role. Now Freddy has to find a way to play the turkey while everyone is laughing at him.