In 1925 the world was blessed with a dog named Balto and other sled dogs.  Below is their story and many resources to learn more about what these amazing sled dogs accomplished. 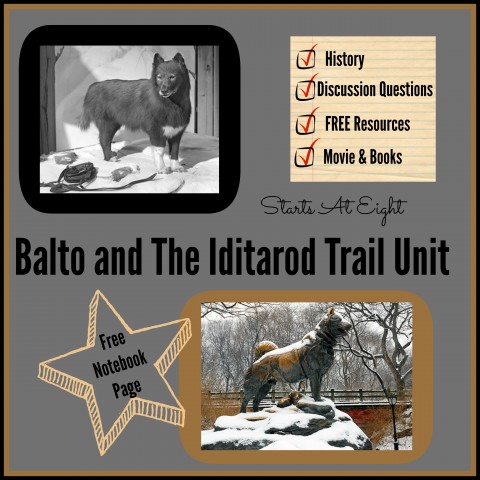 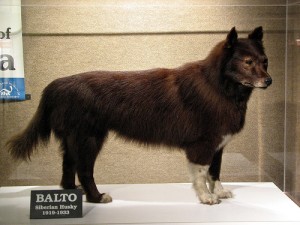 In 1925, a life-or-death race to rescue the children of Nome, AK, from disease made an international hero of one sled dog — and eventually led to the creation of Alaska’s Iditarod sled dog race.

In January 1925, doctors realized that a potentially deadly diphtheria epidemic was poised to sweep through Nome’s young people. The only serum that could stop the outbreak was in Anchorage, nearly a thousand miles away. But the lone aircraft that could quickly deliver the medicine had been dismantled for the winter. In desperation, officials turned to a much lower-tech solution: moving the medicine by sled dog.

A musher embarked from Anchorage on the first leg of a remarkable dog-sled relay aimed at delivering the needed serum to Nome. More than 20 mushers took part, battling temperatures that rarely rose above 40 degrees below zero Fahrenheit and winds that sometimes blew strong enough to knock over sleds and dogs. Reporters brought news of the race to a world suddenly transfixed by the drama in the far north.

On February 1, 1925, the package was handed off for the last time to a musher named Gunnar Kassen in the village of Bluff. Kassen’s sled dog team, led by Balto, set off to cover the final leg to Nome.

Soon after the team left Nenana, a blinding blizzard began, dropping temperatures to -50 degrees and generating wind gusts in excess of 50 mph. Kassen found himself unable to navigate, and almost gave up all hope of making it to Nome in time.  But Balto knew the trail well, and, following his instincts, led the team through the cold and snow.

Over the next 20 hours, Balto slowly led his sled dog team over the final 53 miles. On February 2 at 5.30 AM, the team finally arrived in Nome. The dogs were too tired to even bark, but the serum had successfully been delivered — only seven days after leaving Anchorage, and just 127 1/2 hours after leaving Nenana.

Balto was suddenly a world-famous celebrity; for two years after the serum run, the dog and some of his teammates traversed the continental United States as part of a traveling show, which concluded with the unveiling of a life size statue of Balto in New York City’s Central Park on December 17, 1925. Sculpted by F.G. Roth, the bronze sculpture is New York’s only statue commemorating a dog. The statue includes a plaque with an inscription that reads:

“Dedicated to the indomitable spirit of the sled dogs that relayed anti toxin 600 miles over treacherous waters, through arctic blizzards, from Nenana to the relief of stricken Nome in the winter of 1925 – Endurance, Fidelity, Intelligence.” 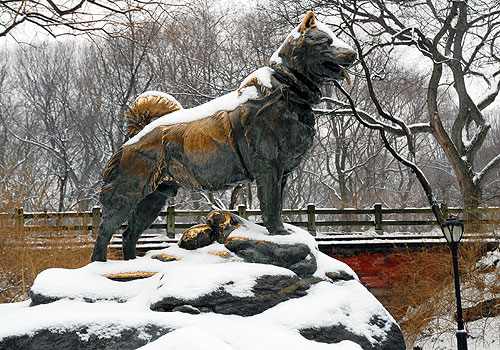 After Balto died in 1933, his body was preserved and displayed at Cleveland’s Natural History Museum. (That is shown in the photo at the top left.) 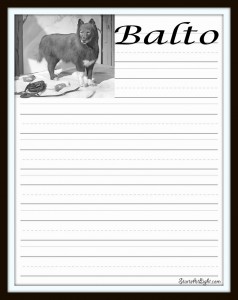 Questions About Balto for Discussion:

A half-wolf, half-husky named Balto gets a chance to become a hero when an outbreak of diphtheria threatens the children of Nome, Alaska in the winter of 1925. He leads a dog team on a 600-mile trip across the Alaskan wilderness to get medical supplies. The film is based on a true story which inspired the Iditarod dog sled race. Written by Alan Katz