Week number 3 has come to an end. Jayden started Chess Club on Friday which knocked my plans off a little bit. Our Chemistry lab of making the first 10 elements on the Periodic Table with marshmallow did not quite get finished. Luckily we either have time over the weekend or we can finish during out built in “make-up” time next week!

Monday & Tuesday: Besides heading out on Monday for music lessons, the first two days of our week were spent at home. I was disappointed to hear from their music teacher that Jayden had in fact not been practicing everything that was written in his notebook, even though he had been telling me he was. Thus, I have spent more time sitting over him while he practices the piano to ensure that he plays everything he was asked to.

Wednesday: Continuing on with our Chemistry for the year, we started learning about atoms, and the first elements of the Periodic Table this week. We did part of the lab/lesson on Wednesday and the rest on Friday. We started with a rhyme about atoms to help us remember what is in an atom. They made a poster with the rhyme and label diagrams of the parts of an atom. 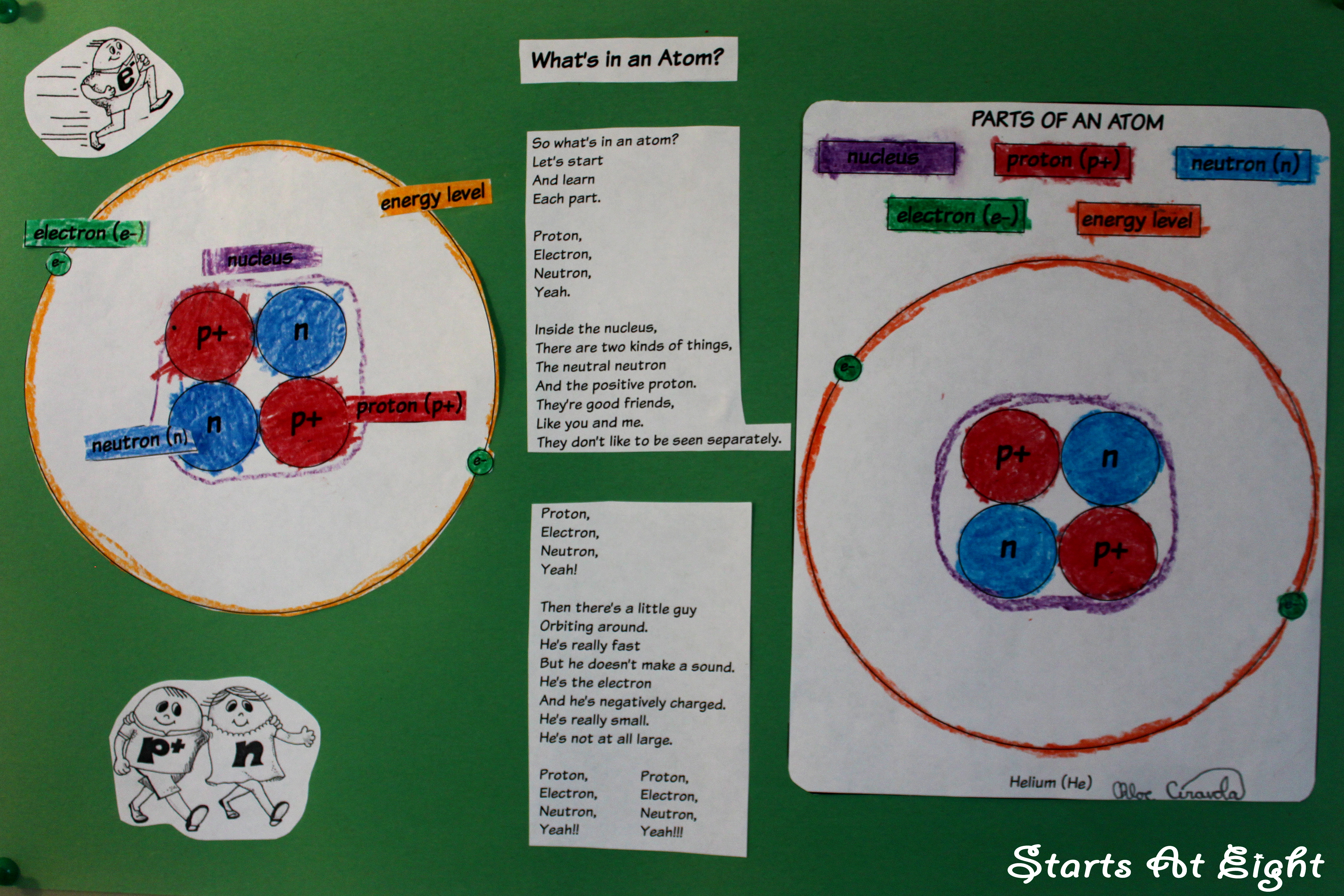 Then on Friday we took over the dining room table to make the first ten elements out of marshmallows. We learned that all protons are the same, all neutrons are the same, and all electrons are the same. We learned that protons are positively charged, all neutrons have no charge and the two like to stick together in the nucleus of the atom. The final thing we learned is that electrons are smaller than protons and neutrons, they are negatively charged, and hang out in things called energy levels around the nucleus of each atom. The only thing making each elemnt different is the number of protons, neutrons and electrons that it has. 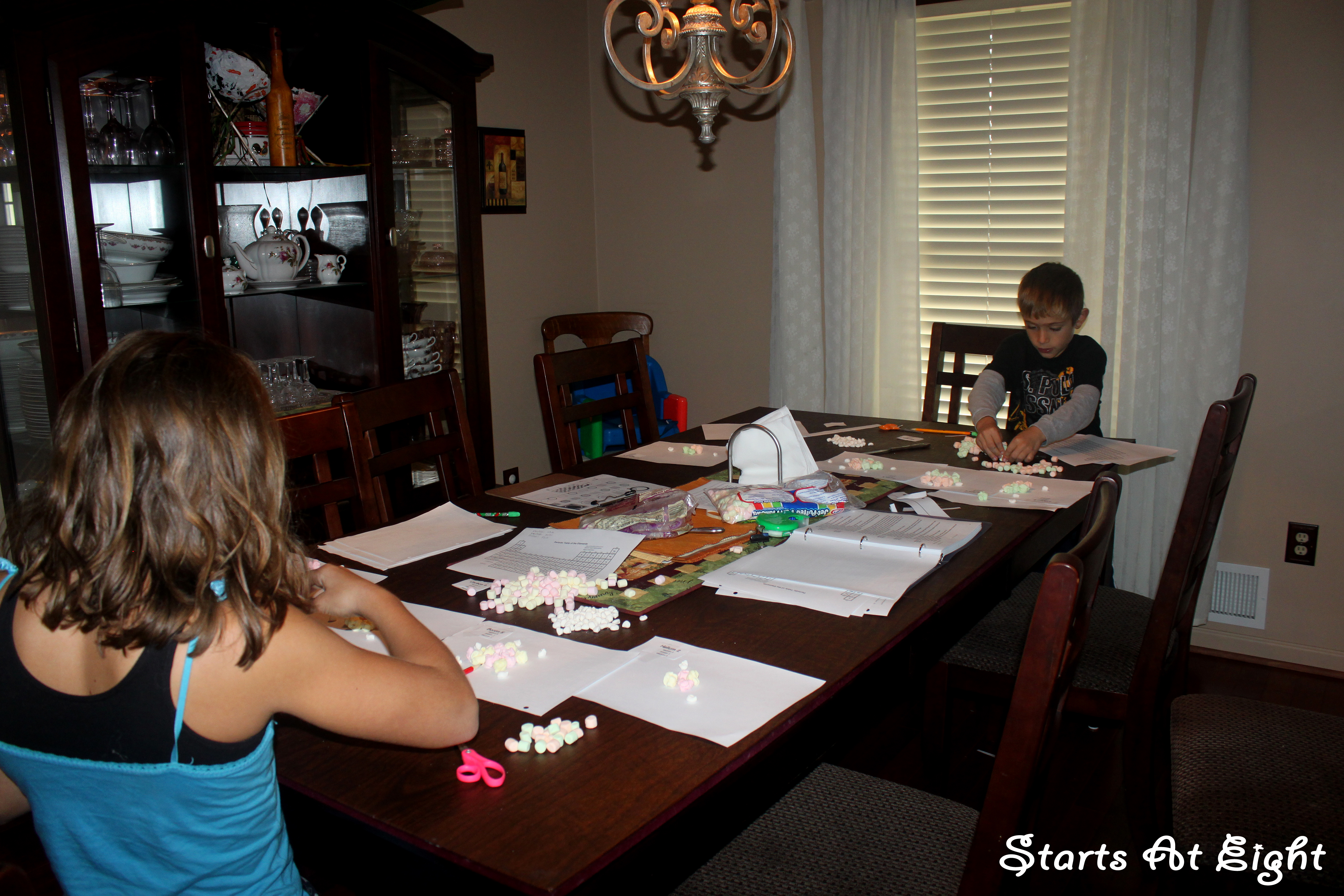 Thursday: In keeping with my promise of doing formal art this year, we continued with our water color theme for the month of September. The first water color painting we did, Jayden found out that if you paint two colors close together without one drying first, then they bleed together. So for this project we learned a technique that keeps that from happening. We used crayons to outline the object we were going to paint so that the water colors would not run into each other. Last time we learned to draw dogs for our water color paintings. For this project we created ice cream cones with many different flavors. 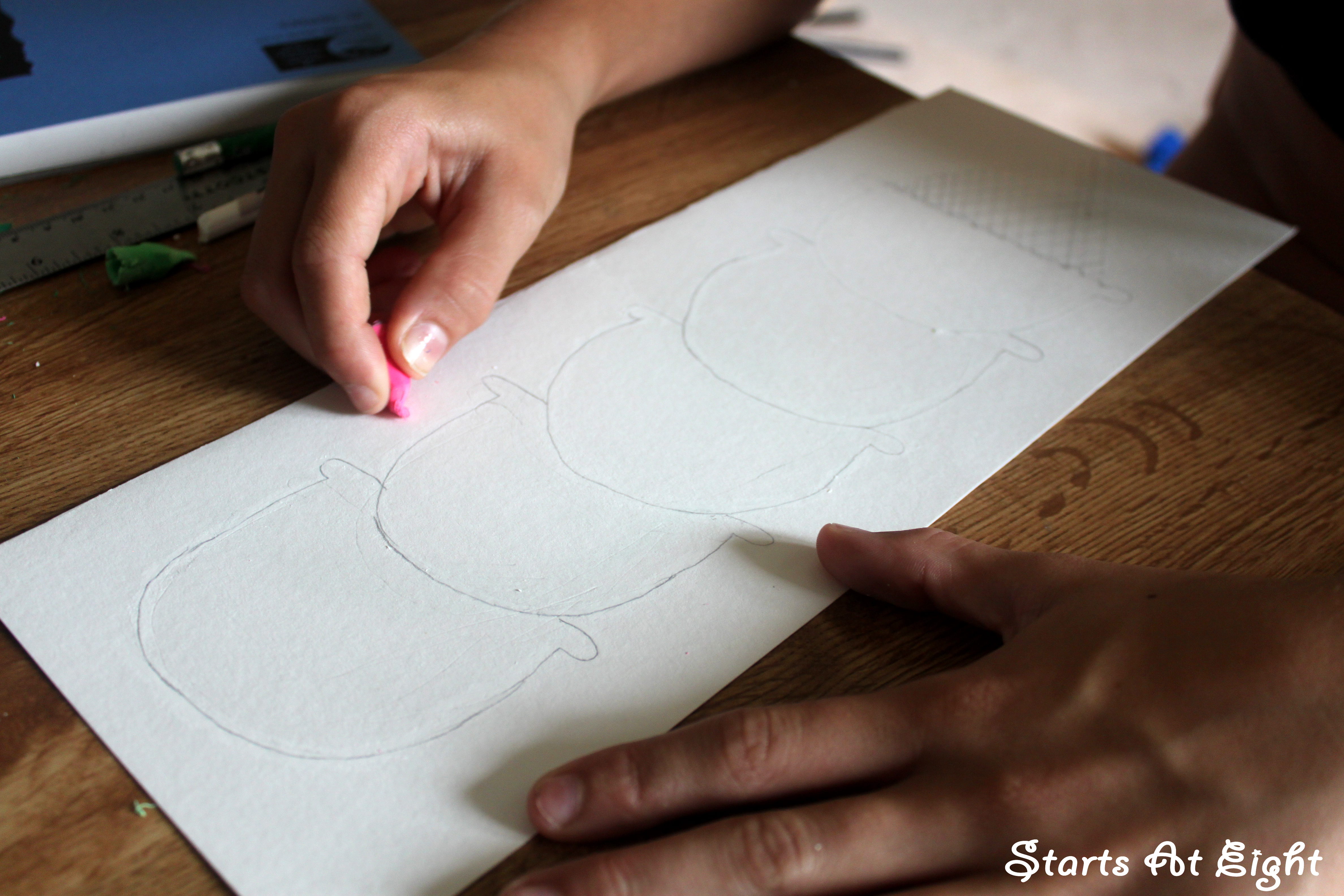 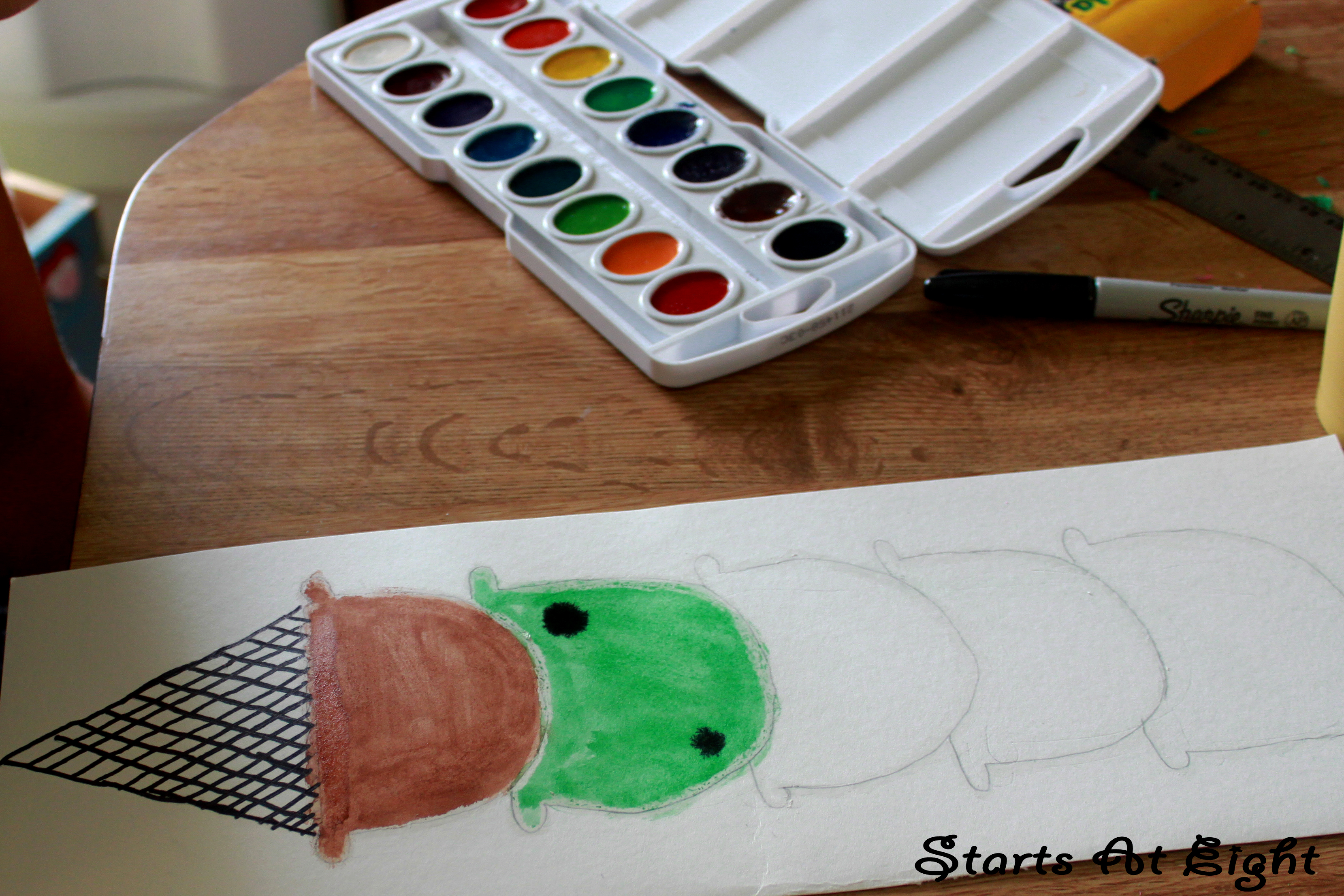 Since the older two have been spending time using watercolors Ava has wanted to do the same. I bought her a cheaper set of water colors that came with simple outlines to paint. We chose the apple to go along with the fall season that we are entering and talking so much about. 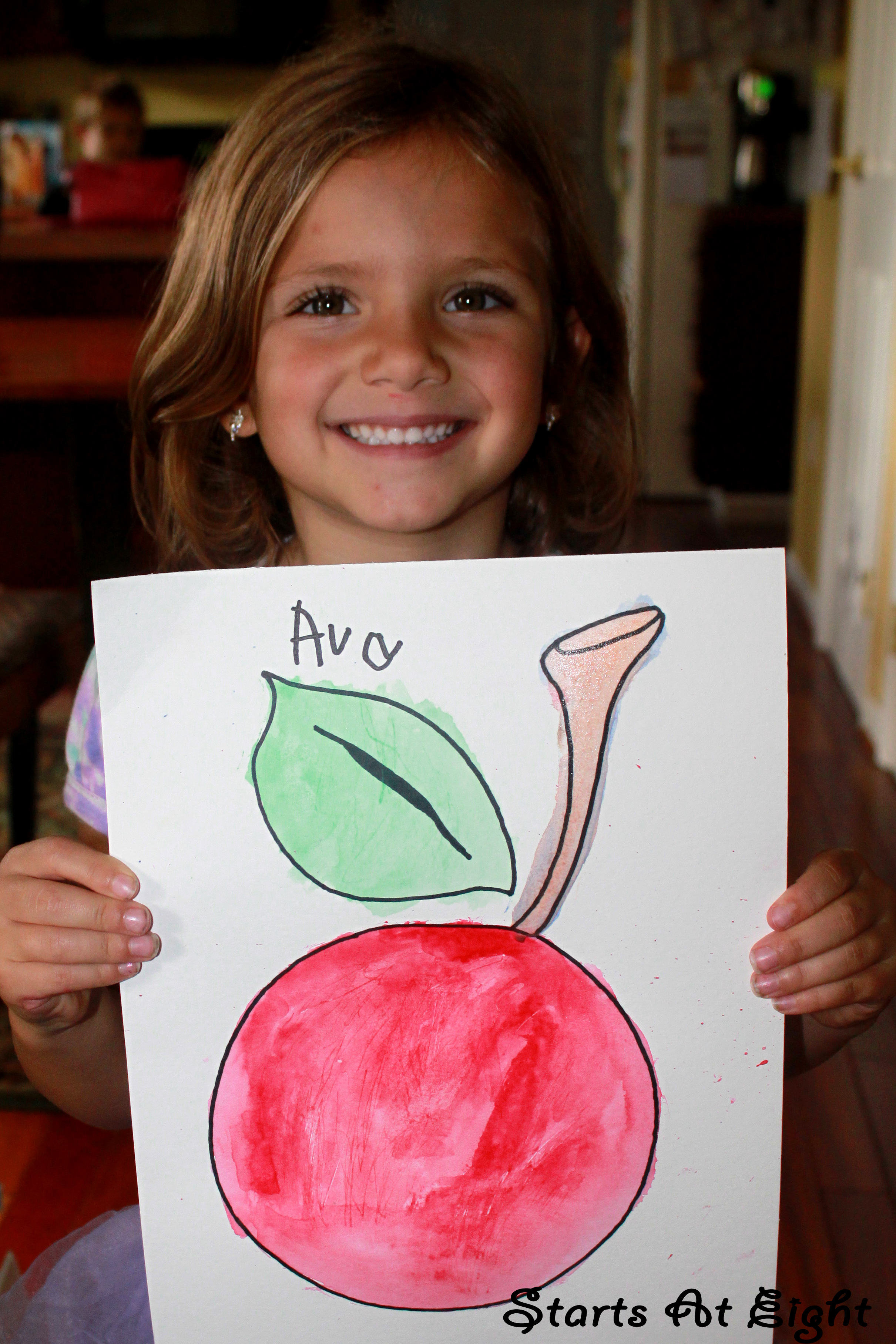 Friday: Jayden had his first Chess Club meeting and it was a hit with him. He was able to spend some time playing chess with kids near his age and skill level, as well as benefit from the instruction of an expert adult player/teacher.

Here are a couple of kid friendly web-site options:

2. http://www.chess4kids.com/default.asp (you need to use this one in Internet Explorer)