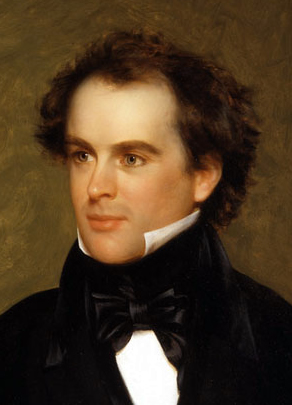 Chloe is reading and we are discussing Wakefield by Nathaniel Hawthorne.

Nathaniel Hawthorne, (1804-1864), ranks among America’s major authors. Between about 1825 and 1850, he developed his talent by writing short fiction and the novel Fanshawe (1828). Then he gained international fame for his novel The Scarlett Letter (1850).  Here is an extensive list of his works.

If you are unfamiliar with this short story you can read the full text here.

In Wakefield, Nathaniel Hawthorne takes a true story that he read once in a newspaper or magazine about a man who leaves his wife for 20 years but lives, all that time, only a block away from her. The man observed his wife often, and only returned after his affairs had been settled and memory of him had passed. He simply returned home, resumed life, and served as a faithful husband for the rest of their lives.

Here is a good summary of Wakefield

An interesting analysis of Wakefield

To Chloe and I it was completely outlandish how this story plays out. As a wife I cannot imagine my husband returning 20 years after he disappears and just taking right back in to normal life as though he was never gone. Even if he had not deliberately left and stowed himself away on a nearby street, it would be difficult because life would have continued on. At some point you have to move beyond, putting one foot in front of the other and at some point you realize that life has gone on and you have move on.

This story reminded me of the movie Cast Away starring Tom Hanks, the major difference being that the character in Cast Away, Chuck, does not deliberately leave his family. But his experience upon returning home to his wife was more realistic in my opinion. Upon returning to civilization (after 4/5 years), Chuck must come to terms with the fact that he has long been given up for dead; his family and friends held a funeral, and Kelly (his wife) has since married Chuck’s dentist and has a daughter. During a clandestine reunion with Kelly, the pair impulsively profess their love for each other but soon realize a future together would be impossible.

This story made for interesting discussion with Chloe. Does it make a difference why the husband was gone? What did he learn from being gone? If his wife had not taken him back would it have all been worth it? How would you feel if you were the wife who was left behind?