To Test or Not to Test……That is the Question 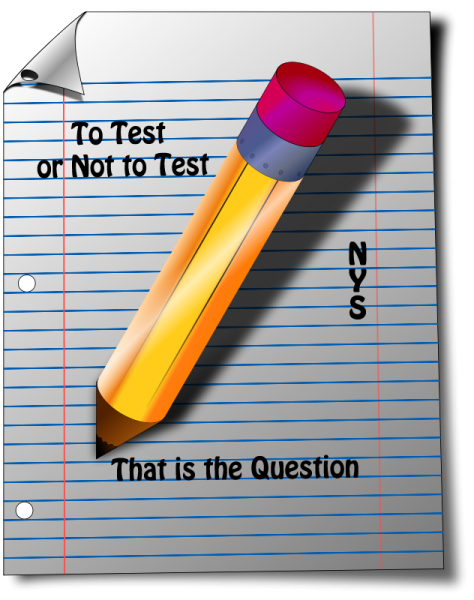 Here in New York State, testing is state mandated, so like it or not, believe in it or not, it is inevitable.  So no, as the title of this states you do not have a choice whether or not to test in New York State, but you do have a choice about how you handle the process.  This is a much debated topic here in New York State.  Do you “teach to the test”?   Which is one thing that most believe is a component to our failing education system.  Do you cram for it just before you have to take it? Do you teach your children the way you believe is best despite the looming test and then see what happens?  I want to start with what the regulations are here in New York State, as well as explain a couple of testing options, then we can touch on the methods people use to teach, and possible reasons behind why they feel that is the best choice.

The New York State Homeschooling Regulations require testing every other year from 4th to 8th grades, and then every year beginning in 9th grade. Since the state allows for 4th grade to be considered the “other” year, that really means 5th, 7th, and then again in 9th and each year after.  Most families we know use the PASS test or the CAT-e test, primarily because they are designed to be administered by the parent, and can be given at home, then sent back to the publisher for grading. New York State has approved both of these for homeschoolers. The PASS test is only given from 3rd through 8th grade, and the CAT-E can be used from K-12th grade.  There are some differences between the two tests:

PASS:  The PASS is not a timed test.  It has three sections:  math, reading, and language arts. There are more questions overall on the PASS test than the CAT-E, but it can be done in whatever increments work for your child.  Given that it’s untimed, you can even spread it out over days or weeks if that is what will work for you. There are about 150 total questions on the PASS test, with roughly 50 questions in each section.  The PASS test can be ordered through Hewitt Homeschooling .

CAT-E:  The CAT-E is different from the regular CAT test. The regular CAT test has social studies and science sections, which are NOT required by New York State. The CAT-E contains just reading, language arts, and math like the PASS test.  Instead of three full sections, it is broken up into six short sub-sections of 20 or so questions each, and the instructions give you a set amount of time for each sub-section, after which you would instruct your child to end that sub-section.  Despite being timed,  your child can do one sub-section and then take a break, and do more later that day or another day. The CAT-E can be ordered through Seton Testing Services

Now that we have talked about the NYS Homeschooling Regulations, and two of the possible testing options, I want to touch briefly on how people might handle their schooling to accommodate the testing requirement.  As with many subjects, like politics, religion, and abortion to name a few, there are many ways to look at this, and many who feel very strongly in their convictions.

On one side of things there are many that feel standardized testing falls short in it’s primary goal of being a measuring mark of a student’s performance.  They hold a strong belief in the negatives of standardized testing and the harms they may hold for their children.  For those that feel this is the case they tend to lean towards a non emphasis on the test.  Going about their learning process as they see fit.  When testing time comes they may have had discussions with their children about their beliefs in the negativity of testing.  Then approach the test as a must do, but don’t put too much weight in it.

The other side of the spectrum may look more like school.  With parents spending time strategically teaching their children the things that will be covered on the standardized test.  Maybe ordering Test Prep books and testing even in non-testing years just to get a feel for the test, and how their children score on it.

By doing a simple online search you can find an endless supply of evidence both to support and refute the validity of testing .  As for me, I think I find myself somewhere in the middle.  I am against the schools teaching just to the test.  I do think there needs to be some sort of standardization or measure, but in no way would argue that what we have in place now is the end all.  The world is made up of “tests” throughout our life, both written, oral and skill based as well.  Colleges still want to see our SAT scores, you have to pass a “test” to get a driver’s permit and license, you have to pass a Civil Service exam to apply for government jobs, you have to answer a battery of questions in an interview for a job.  Would you want a doctor to operate on you if their knowledge and skills had not been tested?  For every subject there is to learn, there is a “grammar” phase.  That stage where you learn the basics.  Whether it be the alphabet for reading and writing, numbers for addition and subtraction, the parts of the human body to begin to study how it works.  As my middle ground I would see a combination of tests to show your basic knowledge, and then real life experience and practice to show you know how to use your knowledge. Our children are taught with a heavy base in math, and language skills.  It is my belief that if you are solid in math, and have a  strong grasp on reading, understanding, and communicating, both in speech and written words, then you can learn anything you put your mind to.

In the end I don’t believe there is a right or wrong answer to how we as homeschoolers approach testing.  There are multiple means to the end result of the inevitable state mandated test.  We have only to choose what feels right for ourselves and our children.