So I just have to digress into a quick rant about the recent vaccine debates I have been subjected to recently.  There are a couple of e-mail loops I am on where the discussions have been not only heated, but cutting, rude, and even childish as times.  I get that many people feel VERY strongly one way or the other, but ENOUGH!  If I have to hear one more person tell me that I am poisoning my children by getting them vaccinated, or that the government is feeding us lies, I think I will injure someone!  One person pointed out that while some may be sick of the discussion, others feel very strongly and want to continue.  I think the moderators have finally kicked it offline, which I am grateful for!  My delete key is overused and tired!  There are MANY subjects that I feel strongly about that I would not inundate my e-mail loops with.  We do not need to push our views on others!

We did just pass a little known birthday to most, his name is Jonas Salk (October 28, 1914 – June 23, 1995) Salk was the American virologist and researcher who developed the polio vaccine. He lived from 1914 to 1995. He spent 8 years working on the vaccine.  Because of Jonas Salk and his colleagues, we no longer get polio.  The entry on Salk in Wikipedia reports: “When news of the discovery was made public on April 12, 1955, Salk was hailed as a “miracle worker,” and the day “almost became a national holiday.” 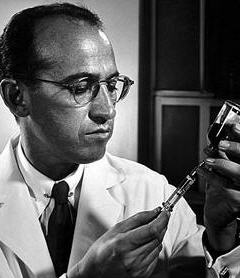 He further endeared himself to the public by refusing to patent the vaccine for his personal profit, as he wished to see it disseminated as quickly and as widely as possible and patenting would have hampered this. When asked who owned the patent, Salk replied: ‘There is no patent. Could you patent the sun?'”  I know that so many parents are divided about whether to vaccinate their children against the “swine flu,” H1N1, and reported shortages aren’t helping the matter. Regardless of whether you vaccinate, it is important to be informed about the virus.  I know here at home we are being extra careful about keeping ourselves germ free and minimizing on the spread of any germs.

Our children have been vaccinated with the usual doctor recommended course of vaccinations.  I picked a doctor I trust and I have to put my faith in her knowledge.  Some would argue this, but that is the decision we have made for our family.  It was not until Jayden was little and “high risk” that any of us got flu shots though.  Since then the kids have received them every year and I think last year was the first year I did not.  When I took the kids in to the doctor a couple of weeks ago they were out of the seasonal shot and had not gotten any H1N1 shots yet.  I am not sure if I will be rushing back in to get the kids their shots.  The flu shot has always seemed neither here nor there to me, and we only did it for a period of years because our pediatrician was adamant that Jayden and those around him should have it.  Had the office had them when we were there, my children would have had the shot.  Will I make another trip?  Probably not, but you never know!

‹ Why "Starts At Eight" › What People Say About You