We recently attended the September 11th exhibit called A Global Moment: A 10-Year Remembrance at the Rochester Museum & Science Center. I was struck right off the bat with some powerful quotes they had hanging on banners at the beginning of the exhibit. One in particular struck me as odd, but only after I read the author and date at the bottom. Below is a not so great camera photo that I took of the quote: 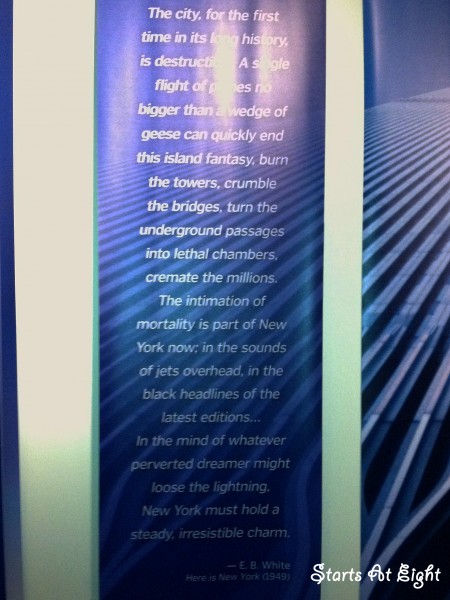 After reading it I just had to know where it came from, and how it was so hauntingly similar and appropriate to the events of 9/11 when it was written in 1949.

It turns out that this quote comes from an essay E.B. White wrote called Here Is New York. White was referring to the nuclear threat from the Soviet Union at the time, but as is evidenced by the fact that it hangs in the 9/11 exhibit, he could easily have been talking about the events of 9/11.

Now I am a novice when it comes to New York City. I was born, raised, and am still living in New York State, but have only been inside the confines of the city once. My best glimpse of city life until now has come from Sex and the City (to which I am addicted). This brief essay by E.B. White takes you on a stroll around Manhattan, and makes you never want to leave. It is everything I imagined and more. I never would have stumbled onto this treasure had it not been for the above poignant quote, written 55 years prior to 9/11, which resounds with such eerie prescience that it was chosen to hang in the 9/11 Remembrance Exhibit. 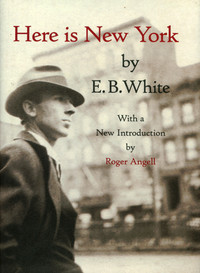 The New York Times named Here is New York one of the ten best books ever written about the metropolis, and The New Yorker called it “the wittiest essay, and one of the most perceptive, ever done on the city.”

In 1947, I was a young editor and writer with Holiday, a new and lively monthly that invited top-level authors and artists and photographers to participate in the emerging postwar travel boom ….

E. B. White was an inveterate non-traveler, however, and when Ted Patrick, the editor, invited him to leave his home in North Brooklin, Maine, and revisit his old haunts in New York for the magazine, he went along with the idea mostly because of me, I suspect, and because of the season. I was his stepson, and his byline in Holiday would be a thrill for me and perhaps even a little career boost. And besides, the assignment would take him out of New England in mid-July, which was hay fever time Down East. He called me up and said OK, he’d give it a try.

He told me that Patrick’s letter, offering the assignment, had begun with the thought that he might “have fun” writing about New York, and he wanted me to tell him that the project had almost foundered right there. “Writing is never ‘fun,’” he said ominously. Just the same, he came down (by train) in hot weather, put up at the Algonquin, across the street form his old New Yorker office, and then went home and wrote. The rest, including the heat wave, is in the book. 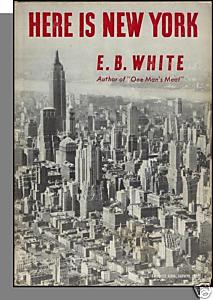 One of my favorites images painted by E.B. White in Here is New York:

There are roughly three New Yorks. There is, first, the New York of the man or woman who was born here, who takes the city for granted and accepts its size and its turbulence as natural and inevitable. Second, there is the New York of the commuter–the city that is devoured by locusts each day and spat out each night. Third, there is the New York of the person who was born somewhere else and came to New York in quest of something. Of these three trembling cities the greatest is the last–the city of final destination, the city that is a goal. It is this third city that accounts for New York’s high-strung disposition, its poetical deportment, its dedication to the arts, and its incomparable achievements. Commuters give the city its tidal restlessness; native give it solidity and continuity; but the settlers give it passion……….

The commuter is the queerest bird of all. The suburb he inhabits has no essential vitality of its own and is a mere roost where he comes at day’s end to go to sleep. Except in rare cases, the man who lives in Mamaroneck of Little Neck or Teaneck, and work in New York, discovers nothing much about the city except the time of arrival and departure of trains and buses and the path to a quick lunch…..About 400,000 and women come charging onto the Island each weekday morning, out of the mouths of tubes and tunnels.

Some of his other popular works include Stuart Little, Charlotte’s Web, The Trumpet of the Swan, and a writing fundamentals collaboration with William Strunk Jr. called Elements of Style which focuses on the principal requirements of plain English style and concentrates attention on the rules of usage and principles of composition most commonly violated.