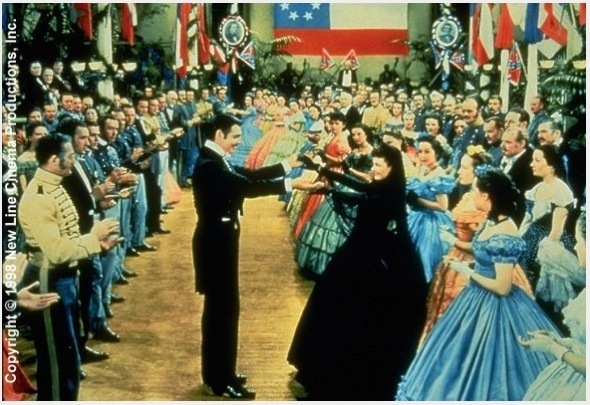 What do we think about the relationship between Rhett and Scarlett?  They get off to a pretty rocky start with him secretly witnessing her little plight to get Ashley to say he loves her, and not Melanie.  Rhett sticks it to her about how she is NOT a lady, although he likes that about her!

As Rhett states in the book:

after saying and doing what I have just overheard.

However, ladies have seldom held any charms for me.

I know what they are thinking, but they never have the courage

or lack of breeding to say what they think.

And that, in time, becomes a bore.

But you, my dear Miss O’Hara, are a girl of rare spirit,

very admirable spirit, and I take off my hat to you.

I fail to understand what charms the elegant Mr. Wilkes can hold for a girl of your tempestuous nature.

how did he put it?

Following this scene, she very quickly marries Charles, he dies before ever getting to fight in the war, and she has their son.  Rhett does not come back into the picture until well after she has gone to Atlanta to live with Charles’ sister Melanie, and Aunt Pitty.  There is lots of talk in Atlanta of a Captain Butler who brings them lovely things like hoop skirts and lace from his business as a blockade runner.  It turns out to be Rhett.  In the photo above from the movie, you see Rhett and Scarlett (in mourning clothes) dancing at the hospital fundraiser.  She was not even supposed to be out at a function like that while in mourning, let alone dancing!

Throughout the beginning stages of their encounters together, Rhett sees right through Scarlett.  She is always trying to manipulate him like she has so many other men, and it infuriates her that it doesn’t work on him!  He has money and freedom and many women.  While Scarlett is confined in her little box because she is a widow and a mother.  I find the social rules to be so terribly confining throughout this book.  Like the fact that when your husband dies you have to be in mourning for 3 years.  This entails dying all of your clothing, including hats, black and wearing only black for 3 years as well as pretty much not being able to socialize with anyone outside of your immediate family, and women friends.

Almost 200 pages after Rhett and Scarlett meet, and what seems a lifetime later, we find Rhett  leaving to fight with the Confederates who were almost defeated and retreating through Atlanta.  It was then that he tells her how he really feels about her.  Saying:

“I love you, Scarlett,

because we are so much alike,

renegades, both of us, dear,

and such selfish rascals.

Neither of us cares a rap if the whole world goes to pot,

as long as we are safe and comfortable.”

He then leaves her alone and on the run from Atlanta back to Tara.  In her care, are a very ailing Melanie, her new baby, the black slave, and her own son Wade.  I found this action to leave me with a very abrupt, out of character with the story, feeling.  Throughout the book we find Rhett flitting in and out of Scarlett’s life as kind of a highlight for her.  He brings her pretty things, takes her out, infuriates her, and gives her a much needed for the storyline, distraction from the nonsense of pining over Ashley.  In this scenario, he does swoop in and save her from the immediate danger of Atlanta, but then leaves her high and dry to try and survive the burden of all those helpless people to take care of, while possibly facing the Union army on her treacherous journey to get back home to Tara.

Taking into consideration that I have NO clue what happens in the end, I find myself wondering what will come of Rhett and his relationship with Scarlett.  I am assuming based on my general feeling about this story that he survives his stint with the Confederate army, but then what?  Do they see each other again?  Do they every marry?  Does anything happen outside the confines of a marriage between the two of them?  Does he really love her or did he say that in the heat of the moment?  Could her feelings for Ashley fade and we find her realizing that there could be something between her and Rhett?  So many questions, so few answers!

Onward with the book, and so many other topics to hit.  As with all of these posts I hope you will chime in and let me know what you are thinking.  Tell me what you think about the subject I have brought up, or bring up something that you are thinking and want to discuss.  I am interested to see how others feel about Scarlett and Rhett,  or about the social rules of the south in the 1860s.  I might just hit on that more in another post!  How about Scarlett and Ashley?   I may be heading there as well!