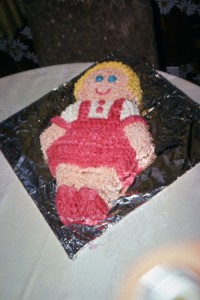 Yesterday, February 25th, was my birthday.  As birthdays go it was pretty normal for me.  A regular day with nothing really special other than general well wishes, a couple of cards, and a fantastic homemade ice cream cake.  My birthdays in adulthood are not nearly as great as I remember my childhood ones to have been!  I remember cakes, and balloons and excitement over who was coming to my party.  My mother, on the other hand, remembers what a brat I was at my parties and how I always had to be the winner of the games or I made a scene.

The little girl cake was made for my mother before I was born.  I would be the third child in my family after 2 boys.  My dad very much wanted a girl (my mom too).  He always wanted a “Heidi” running around.  Their best friends had a daughter a little over a year before I came about and they named her Heidi because they did not think my parents’ would have one of their own.  Then, along I came.  This cake was made without knowing if I was a girl or not, but everyone was hoping! 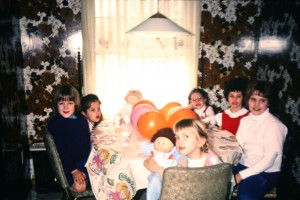 I remember having a Cabbage Patch themed party.  My favorite was a 60s Dance Party theme due to my favorite song at the time being It’s My Party (and I’ll cry if I want to).   Which was apparently fitting for my birthday parties as a child!  We did our best to dress in 60s garb and danced to all the great 60s music. Somewhere in my mid teens I had a joint birthday party with Melissa Jones, and lots of friends.  I even recall a Lion King cake for a late teens party given to me by my childhood best friend, Kim.

Then my 16-20s were spent on long weekend vacations to Toronto with my parents.  I was spoiled!  Who wouldn’t love a weekend in a fancy hotel, a musical and shopping at a huge mall?  One year I bought these green suede shoes that were my favorites for 10 years or so!  During those years I saw such productions as Phantom of the Opera, and Miss Saigon. 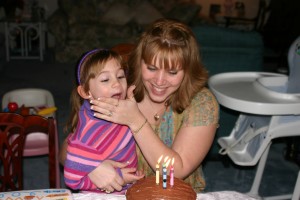 In more recent years, the joy of my birthday is more about how excited my children are about it!  They want to sing “Happy Birthday”, bake cakes, make cards, and blow out candles!  This year Chloe and I had been in the Dollar Store just before my birthday.  She had apparently seen a card there she liked for my birthday but could not buy it.  Instead, she tried to memorize it and then she came home and reproduced it to the best of her ability!  She was so excited about it that she gave it to me the night before because she could not wait!  Those are the moments I love about my birthday these days.