Generosity….One You Don’t Want to Miss!

It is no secret to those of you who follow my blog that I have been a little, well, uninspired and lax with my blog recently.  Yesterday something happened that was more than noteworthy.  So here I sit, in the wee hours of the morning, hammering out these words that lifted my spirits and gave me hope……..

Yesterday my oldest baby, Chloe Bella turned 11.  She is one that plots from the day after her birthday for what she will do for the next one.  Chloe makes lists, and plans about who, what etc.  Her party will come this weekend, but we still try to do something to make the actual day special as well.  This year we met Poppy and Gommy at the mall for lunch.  I had just let Chloe choose a small gift from Claire’s, where she walked away with 2 nail pens and a bottle of clear coat.  Nail decorating is one of her big interests these days so she is slowly building up her polish and pen collection.

We arrived at the table in the food court to Gommy singing “Happy Birthday” and a large cookie cake with Happy Birthday Chloe written on it.  Chloe could not have been happier with the sweet surprise waiting for her. 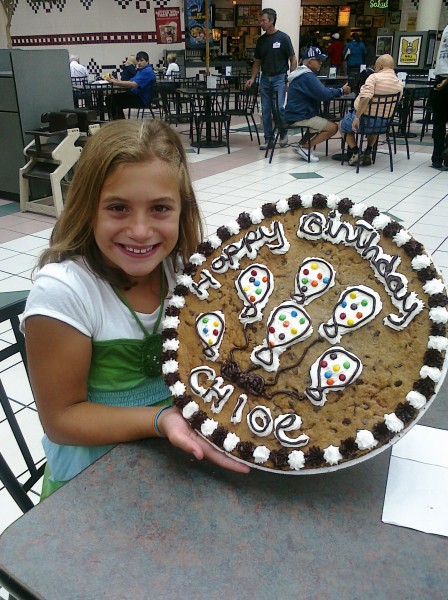 After lunch my mom took her to Barnes and Noble to buy this American Girl Babysitter Business Kit book she has been wanting.  We then decided to top off the afternoon with a movie of Chloe’s choice.  It was a tough decision for her to choose between Despicable Me and Nanny McPhee Returns.  Seeing as Nanny McPhee was starting at precisely the time we were standing in front of the theater (1:25pm), she chose that.  One hour and forty minutes, a whole bunch of laughs, and a small cry for a happy ending later, we headed out of the theater and home for dinner and to rush Chloe off to her gymnastics practice.

The reason I am telling you all this is not for what happened during the day, but for what occurred later in the evening.  During the ride home from practice Chloe asked me where her shorts were that she had on earlier in the day.  I asked her “Why”, and she proceeded to tell me how her little black wallet with all of her hard earned money ($65), had been in the front pocket of her shorts while we had been at the mall.  Red flag number 1 immediately goes up in my head!  We have had countless conversations about NOT carrying ALL her money around with her.   I suggested if she insisted on bringing her own money to places that she carry a smaller amount, say $5 or $10.  Over the past weekend she had carried $20 with her to the NYS Fair and even that was more reasonable than the whole amount!  Needless to say the wallet is gone, with all of her money, and on her birthday no less!  🙁

I first called the theater but nothing had been turned in (of course), they said they would take my name, number and location of where it was lost and let us know if they found it.  I then scoured her room, looked in our truck, realized we had been in my parent’s car and so I called them to look there.  But, in the end, it is gone, just gone.  She is one heart broken little kid.  She sat in a chair and sobbed into her hands.  My heart is breaking for her, but I did try to warn her and she chose not to listen.  I told her this was going to be a very hard lesson to have to learn and that hopefully she would think things through more carefully in the future.

Hours roll by and the kids are getting tucked in to bed (at 10:45pm after a visit from Uncle Tony).  Jayden hands me a folded up piece of paper and asks me to give it to Chloe.  I just figured it was a birthday note and passed it along without a glance.  Now what I found at midnight when I came up to bed is what this story is really about….. 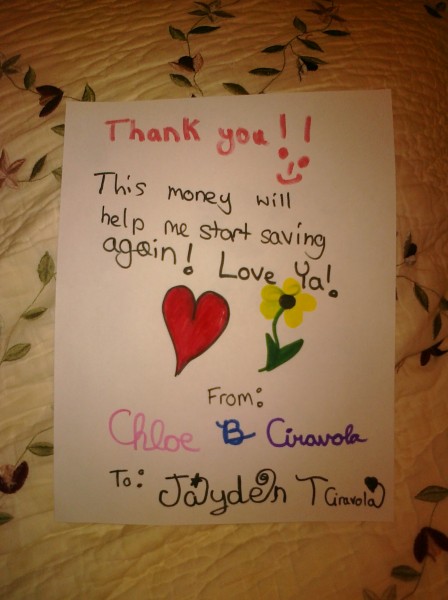 Jayden must have felt bad for Chloe and given her money.  Which of course, that in itself is so sweet and selfless.  BUT what makes it even more so is that Jayden has little to nothing to give (I would say no more than $2-$3), and I will tell you why……

Not so long ago we found out he had “stolen” change out of our “change jar”.  I actually never would have known except for the fact that I called him on the carpet about something else, without saying what it was, and he admitted to taking money from the jar…..instead of what I was scolding him about (which was having played video games in the morning without my permission).  I was stunned in that moment, but held my composure and took ALL of his money from his piggy (well, football) bank away.  He had saved over $16 at that point and it was a great deal to lose.  I hoped it would teach him to think twice about “stealing” money that he knows is not his.  So after being stripped of all of his money for something he had done, what little he had managed to save up again, he took and gave at least some of it (I don’t know how much because I did not look and will have to wait until they are up to find out), to his sister who had lost all of hers by being careless about carrying it all with her!

Maybe I am doing something right, and maybe, just maybe my babies are more honorable and selfless than I could have ever thought.  🙂