I have a 9 year old girl in my house. While she is not as girly as she used to be, her favorite color is still purple and she loves all the girly books! From fairies to animals, and fun little girls, this list has it all the glitzy chapter books for girls! 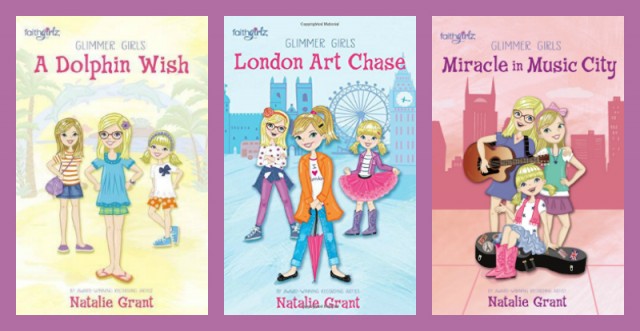 Join twins Mia and Maddie and their sidekick little sister, LuLu, as they travel the country finding adventure, mystery, and sometimes mischief along the way. Together with their famous mother, singer Gloria Glimmer, and their slightly wacky nanny Miss Twist, the sisters learn lessons about being good friends, telling the truth, and a whole lot more.

These are the first two books in Grammy-Nominated, Dove-Award-Winning music artist Natalie Grant’s new Glimmer Girls series from Faithgirlz! This fiction mystery series is ideal for girls ages 8-12. The series is loosely based on Natalie’s life on the road with her family, and the mystery-solving characters are based on her own twin daughters (and her youngest, too!).  { Disclosure: I want to thank ZonderKidz for supplying me with a copy of A Dolphin Wish & London Art Chase for me to review. While I received these free of charge in exchange for my review, my opinions are my own, and have not been influenced in any way.}

Centered around the three sisters, older twins Mia and Maddie and their little sister Lulu (like Grant’s own family), who are the daughters of a pop star mom, Glimmer Girls  is a fun and relatable pre-teen look at family life, girl stuff and mysteries! With a family that prays together and treats each other with kindness and respect, Glimmer Girls models positive family relationships and interactions as opposed to the usual junk of snarky teens and nasty language that come with many pre-teen and teen books these days. Grant writes with an nack for pre-teen dialog and stirs up adventure and mystery in a fun and wholesome way without being overly preachy.

In London Art Chase, the first title in the new Faithgirlz Glimmer Girls series, readers meet 10-year-old twins Mia and Maddie and their adorable little sister, LuLu. All the girls are smart, sassy, and unique in their own way, each with a special little something that adds to great family adventures.

There is pure excitement in the family as the group heads to London for the first time to watch mom, famous singer Gloria Glimmer, perform. But on a day trip to the National Gallery, Maddie witnesses what she believes to be an art theft and takes her sisters and their beloved and wacky nanny Miss Julia, on a wild and crazy adventure as they follow the supposed thief to his lair. Will the Glimmer Girls save the day? And will Maddie find what makes her shine?

In A Dolphin Wish a three-night stop in the city of San Diego seems like it might be just the break the girls need—lovely weather and great sights to see. That is until they hear animal handlers at “Watery World” talking about the trouble they’ve been having keeping the animals in their habitats. Mia and her sisters cannot resist a challenge and they talk Miss Twist into another visit to the educational amusement park to search for clues as to what or who is helping the animals escape.

Be on the look out for book three – Miracle in Music City (coming August 2016) where Gloria wants her daughters to learn they aren’t too young to make a difference, so she gets them involved in her annual benefit and auction. But as things often do with the trio of smart and sassy sisters, they get themselves and their nanny Miss Julia involved in a lot more than just helping mom raise money for a worthy and wonderful cause. 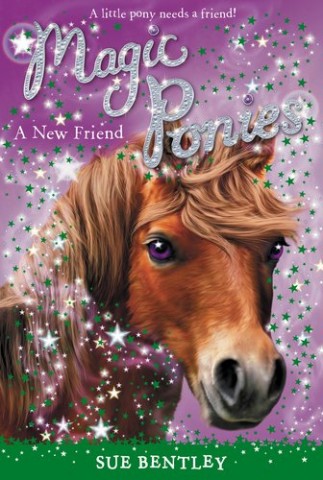 There are 8 books in the Magic Ponies Series.

The Magic Ponies series is about Comet and his herd, who live on Rainbow Mist Island. His twin sister, Destiny, borrowed the Stone of Power, which is supposed to protect the herd from the dark horses, and then she and her brother lost it when they were playing in the clouds. Destiny then ran away, fearing she would be in trouble. Comet found the Stone and brought it back.  By that time it was too late, Destiny was miles away, on Earth. This causes Comet to set off to bring her back, helped by the ability to change into a normal pony, rather than one with wings. 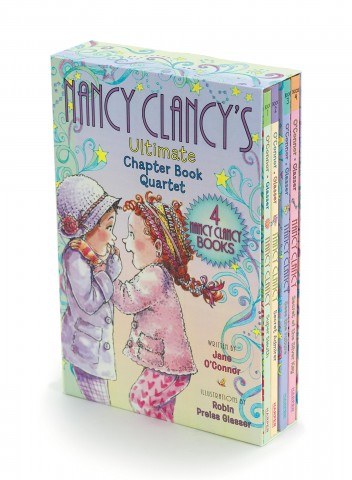 Little girls who grew up with Jane O’Connor’s Fancy Nancy picture books can spend some quality time with their BFF because Nancy Clancy is now starring in her own chapter books! Fans of Nancy Drew’s Clue Crew will be happy to see a new Nancy join the ranks of super sleuths! 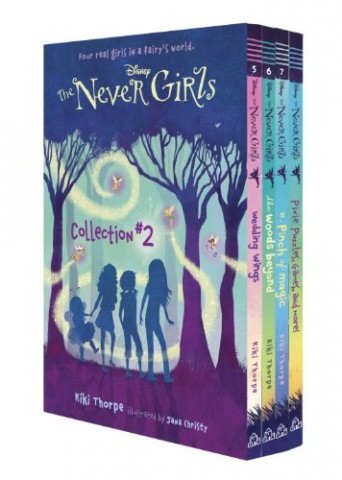 Far away from the world we know, on the distant seas of dreams, lies an island called Never Land. It is a place full of magic, where mermaids sing, fairies play, and children never grow up. Adventures happen every day, and anything is possible.

There are two ways to reach Never Land. One is to find the island yourself. The other is for it to find you. Finding Never Land on your own takes a lot of luck and a pinch of fairy dust. Even then, you will only find the island if it wants to be found.

But every once in a while, Never Land opens its doors to a special few. Believing in magic and fairies from the bottom of your heart can make the extraordinary happen. If you suddenly hear tiny bells or feel a sea breeze where there is no sea, pay careful attention. Never Land may be close by. You could find yourself there in a blink of an eye.

One day, four special girls came to Never Land in just this way. This is their story. Check out The Never Girls Series. 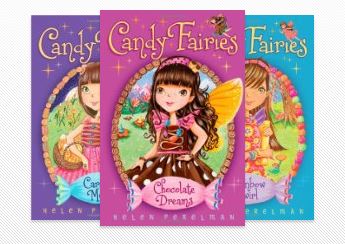 In Chocolate Dreams, Cocoa the Chocolate Fairy is blamed for the missing chocolate eggs. But soon the other fairies discover that it’s the sour troll Mogu who is taking their candies—and they’re determined to stop him!

In Rainbow Swirl, Raina the Gummy Fairy has her work cut out for her when a terrible storm hits Sugar Valley the night before the annual candy contest, and the colors for all the candies swirl together. What will Raina do to save the day?

In Caramel Moon, the crop of candy corns is shrinking! Is someone playing a trick? Melli the Caramel Fairy and her friends will find out!

And in Cool Mint, it’s Dash the Mint Fairy’s responsibility to make a new candy cane throne for Princess Lolli. But she seems more interested in going marshmallow sledding. Will she find a way to do both? 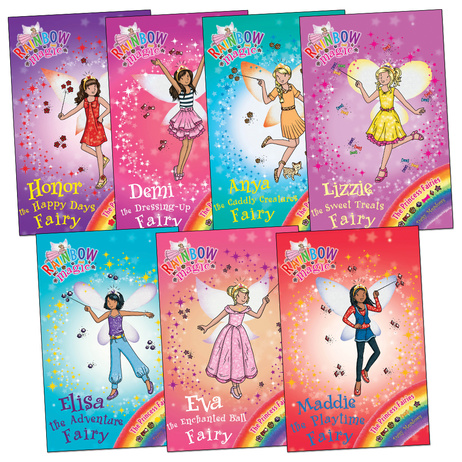 The number of books in this series by Scholastic is oh my goodness insane! There are: 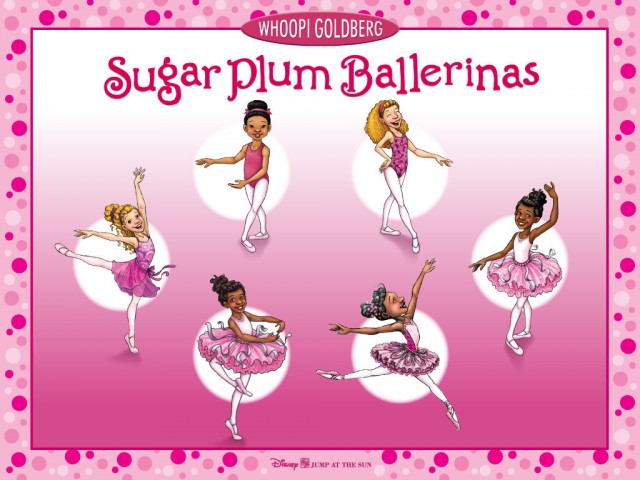 Goldberg was inspired to write the books for kids who are forced to do things they are not necessarily interested in.

In Goldberg’s own experience, it was just the opposite. She didn’t have the opportunity to take dance lessons until she was an adult. As a child, she dreamed of being a dancer.

“Becoming a ballerina wasn’t really an option when I was a kid,” she said.

This book series, which is written for girls ages 9-12 years old, was not originally intended to be inspirational, says Goldberg. Her goal is to make people laugh, although they may also learn to have a good time in life. 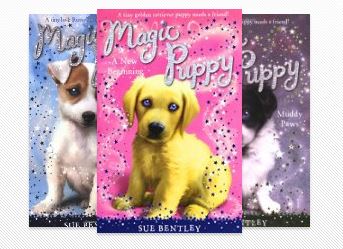 There is also a series of 13 Magic Kitten books!

As if ponies, puppies, and kittens weren’t enough, yes there are Magic Bunnies too!

Other Books for Girls