His foundation is eternal. Her world is crumbling, but a chance encounter leads to love. From England to Jamaica and back, will they be able to accept God’s plan, even if they are forever separated by the triangular trade? Or will faith be enough to satisfy their . . . Starving Hearts? 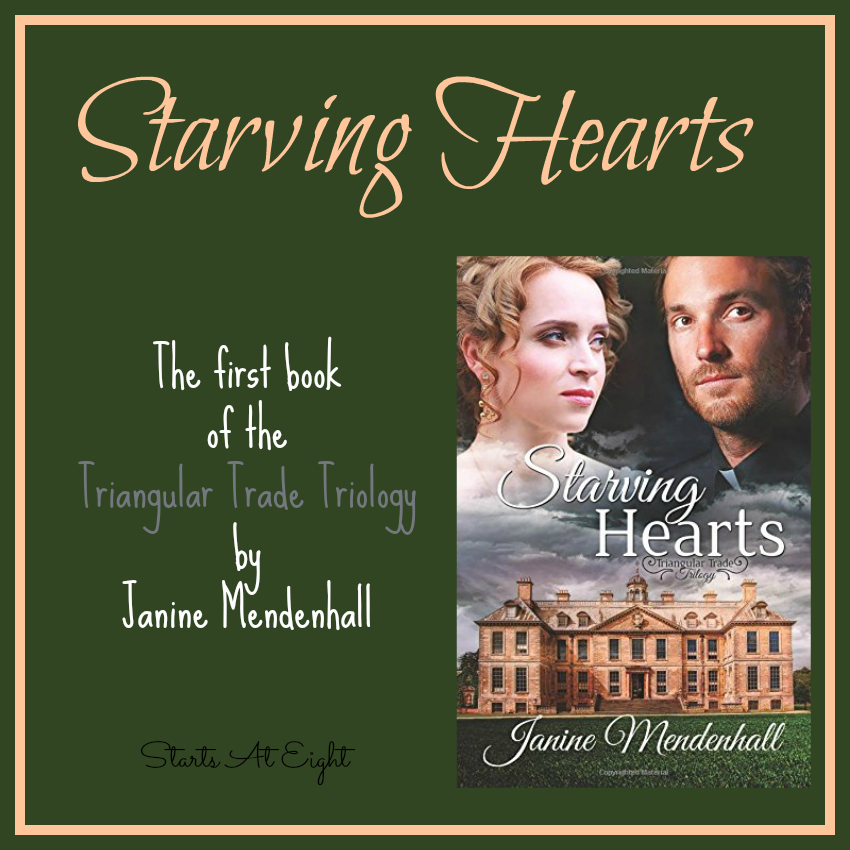 Since her assault, Miss Annette Chetwynd has been plagued by nightmares and worries about an arranged marriage.

She yearns to find her anonymous rescuer. Unfortunately, her health and intellect prevent it. Both repel suitors and cause Annette to doubt God’s existence, at least until He answers her prayers in an unusual way. . . .

Mr. Peter Adsley is joining the clergy, and he desires a godly wife by his side. After a failed attempt to obtain one, he engages in a clandestine meeting with the bewitching young woman who keeps crossing his path. But she is so unsettling.

Destined for disappointments, Peter and Annette both endure disgraceful situations. Will Peter’s faith sustain him through overwhelming setbacks? Can Annette overcome her doubts? Or will their starving hearts yield to the machinations of a mad man?

Purchase a copy of Starving Hearts

Disclaimer: I want to thank Janine Mendenhall and Litfuse Publicity for supplying me with a copy of this book for me to review. While I received this free of charge in exchange for my review, my opinions are my own, and have not been influenced in any way.

Janine Mendenhall teaches teens English, of all things! Sometimes she sleeps, but most nights she reads, writes, or watches movies like Pride and Prejudice and claims she’s researching her next book. Splickety Love and Splickety Prime have published her flash fiction. She and her husband, Tom, live in North Carolina where they and their two golden retrievers help gratify the needs of their five children and two cats.

Starving Hearts is a debut novel for Janine Mendenhall and the first of a trilogy.

Historical fiction lovers take notice!  (Think Downton Abbey and Jane Austen) This book is based in 18th Century England and offers a great deal of that time period up for us to enjoy!

There is a villain to hate and heroes (Annette and Peter) to root for. What I love is how she weaves in struggle and hope. Giving the characters obstacles to overcome, flaws that get in the way, and mystery to keep you guessing!

This book gives a clear message of the gospel, and faith in God, with a verse quoted in each chapter.

Historical fiction loves, romance loves, mystery lovers, this one has it all!

Will Annette’s search for love and acceptance replace the loss and hurt in her heart? Find out in Janine Mendenhall’s book one, Starving Hearts, of the Triangular Trade Trilogy. Since her assault, Miss Annette Chetwynd has been plagued by nightmares and worries about an arranged marriage. But she yearns to find her anonymous rescuer. Unfortunately, her health and intellect prevent it. Both repel suitors and cause Annette to doubt God’s existence, at least until He answers her prayers in an unusual way. . . .

Join in the search for love and acceptance with Janine and Starving Hearts by entering to win the Delightful Heart Gift Pack Giveaway.

One grand prize winner will receive:

Enter today by clicking the icon below, but hurry! The giveaway ends on September 12. The winner will be announced September 13 on Janine’s blog.