Self Study vs. Group Study

As a homeschooling parent, you may sometimes get anxious that your child doesn’t have the same access to study groups as children at regular schools do. If you do get anxious, then you don’t need to, because there are many positive aspects of studying independently. Let’s examine the pros and cons of Self Study vs. Group Study. 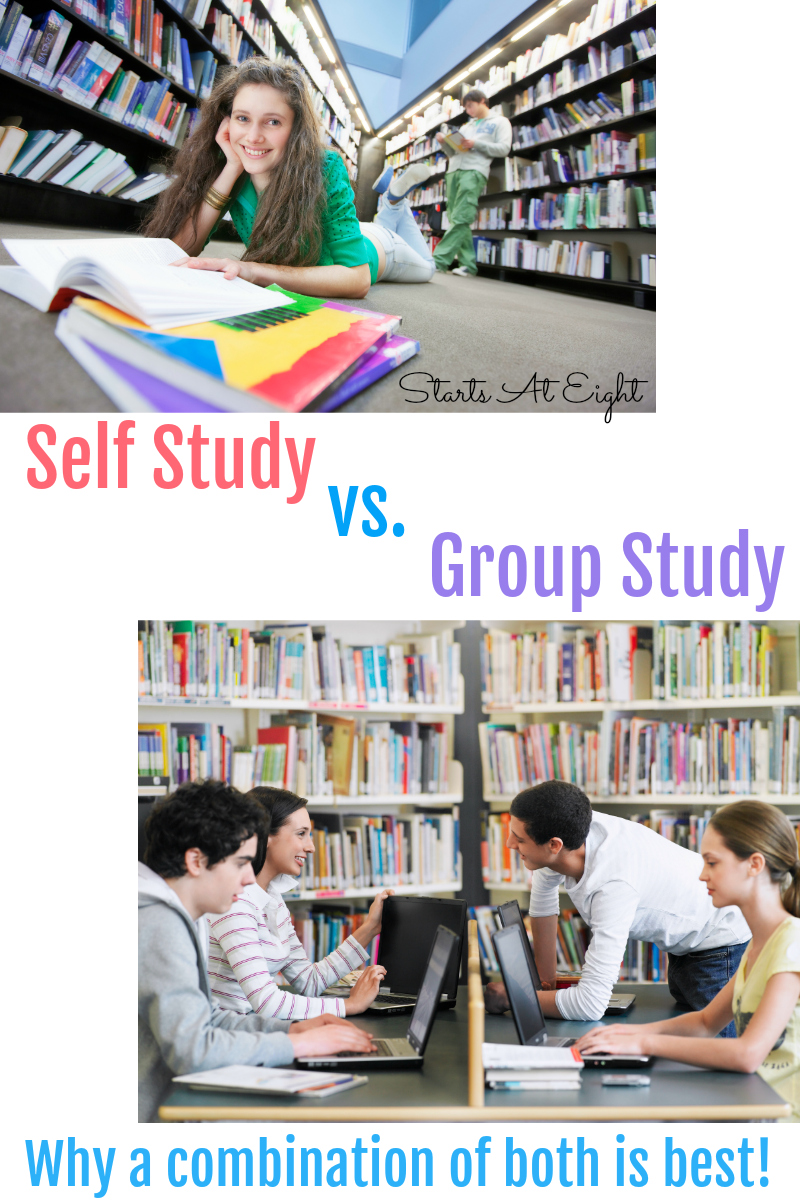 Self Study vs. Group Study

Self Study vs. Group Study. Which is more beneficial? My initial thought is that it depends on the subject being studied as well as the student’s learning style. There are pros and cons to both sefl study and group study that may suggest taking advantage of both if possible!

Advantages of Self Study

Students learn the best when they actively engage with the study material. When they map what they’re studying with the repository lying in their brains. When they eschew the urge to look up the solutions at the first failure and, instead, struggle with the problem, stretching their faculties to the limit.

Active learning, however, is individualistic, and the pace of learning can vary widely depending on the current ability of the student. In self-study, students can learn at their own pace without the peer pressure to conform to the group discipline. Imagine bicycles, cars, and trucks riding on the same lane!

Moreover, frequent group study can lead to complacency. When a student knows that she’ll be meeting her study group tomorrow, she is more likely to quit on a challenging problem earlier than otherwise. Why exert yourself if the problem can be solved by others? And there lies the problem.

We – adults or children – improve the most when we stretch ourselves beyond our current level, not by a quantum leap, but little bit every time. This process is nothing but deliberate practice (the method utilized by the top performers in any field) at some level working unobtrusively in the background. But complacency thwarts it.

Sunrays when passed through a convex lens can burn a piece of paper. But without the lens, they’re benign. That’s the power of focus. If a student isn’t focused while studying, her learning will be less effective.

Like it or not, winks, smiles, small talks, and occasional questions (yes, they distract those who aren’t part of that Q&A) are an inseparable part of group study. They interrupt group members every few minutes, and these innocuous interruptions can completely derail the momentum.

“Students who are interrupted while studying take longer to learn the material and feel more stressed. Gloria Mark, of the University of California, Irvine, has shown that workers typically attend to a task for about three minutes before switching to something else (usually an electronic communication) and that it takes about 20 minutes to return to the previous task,” says this HBR article.

However, most students aren’t conscious of this subtle leak in time, and therefore let interruptions – whether from group study or other means such as screen time – corrode their sessions.

All that being said, group study does have some advantages over self study.

1. If a student is not able to understand a concept or solve a problem despite her best effort, she can come unstuck through the help of her group-study mates. This can especially be important when she is facing a challenging deadline or an exam.

2. Group-study can bring reality check regarding how she is faring compared to others, and she can also learn best practices and mistakes to avoid from others who have already gone through that experience.

3. The group can also be helpful in providing her the much needed motivation when she isn’t doing so well.

These positives of group study, however, aren’t as core to studying as learning effectively and avoiding interruptions (those which you gain from self study).

How to Get The Best of Both Worlds

A student can get the best of both the worlds by predominantly studying solo, and occasionally scheduling group-study sessions to clarify points where she is stuck. Remember, such sessions shouldn’t be for studying, but for concept or problem resolving.

If your child decides to be part of a study group, she should make sure to pick members with complementary abilities (one good in math, the other in science…), have a clear agenda for sessions, and enforce discipline to avoid leaking time.

While self study all by itself is a viable and productive option, there are definite advantages to finding opportunities for group collaboration as well!

Author Bio: This article has been contributed by Anil. He writes on study skills, test taking, productivity, and other soft skills for students at Lemon Grad.