Inspired by the series, Great Black Heroes, I have set out to create a series of posts in honor of Black History Month about some of the great and not so well known contributions of blacks and African-Americans. These five black inventors brought us things like hair care for African Americans, traffic signals, and a shoemaking machine. 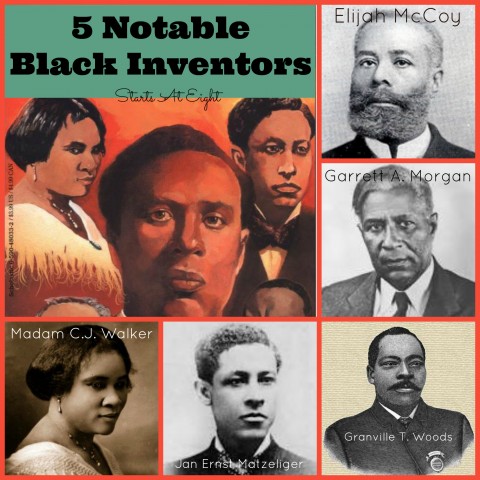 Born in 1867 and dies in 1919. After suffering hair loss of her own from a scalp disorder she began working on the development of hair care products for African Americans.
Video & Summary of her life from biography.com

Born in 1843 and died in 1929. This noted African American inventor was issued more than 57 patents for his inventions during his lifetime. His best known invention was a cup that fed lubricating oil to machine bearings through a small bore tube. Machinists and engineers who wanted genuine McCoy lubricators might have used the expression “the real McCoy.”

Born in 1887 and died in 1963. He developed both the first traffic signal invention and the first patented gas mask.

Born in 1856 and died in 1910. Granville is known to many as “The Black Edison,” because both were great inventors who came from disadvantaged childhoods. But unlike Edison, Woods was considered fortunate to receive an education to help him on the road to his inventions. He invented the telegraphony. The telegraphony combined features of both the telephone and telegraph and was puchased by Alexander Graham Bell’s company. He later fought with Thomas Edison over patents for the telegraph.

Born in 1852 died in 1889. Jan invented a shoemaking machine that increased shoemaking speed by 900%! This allowed for lower prices for consumers and more jobs for workers. Matzeliger left behind a legacy of tackling what was thought to be an impossible task – making shoes affordable for the masses.