I have a son who has trouble sitting still. When he was younger he would jump from couch cushion to couch cushion while we worked on flashcards. Learning for him is easier for all of us when he can be active. Science projects are a great way to keep his hands and mind moving. One that we have had a ton of fun with is paper airplanes. 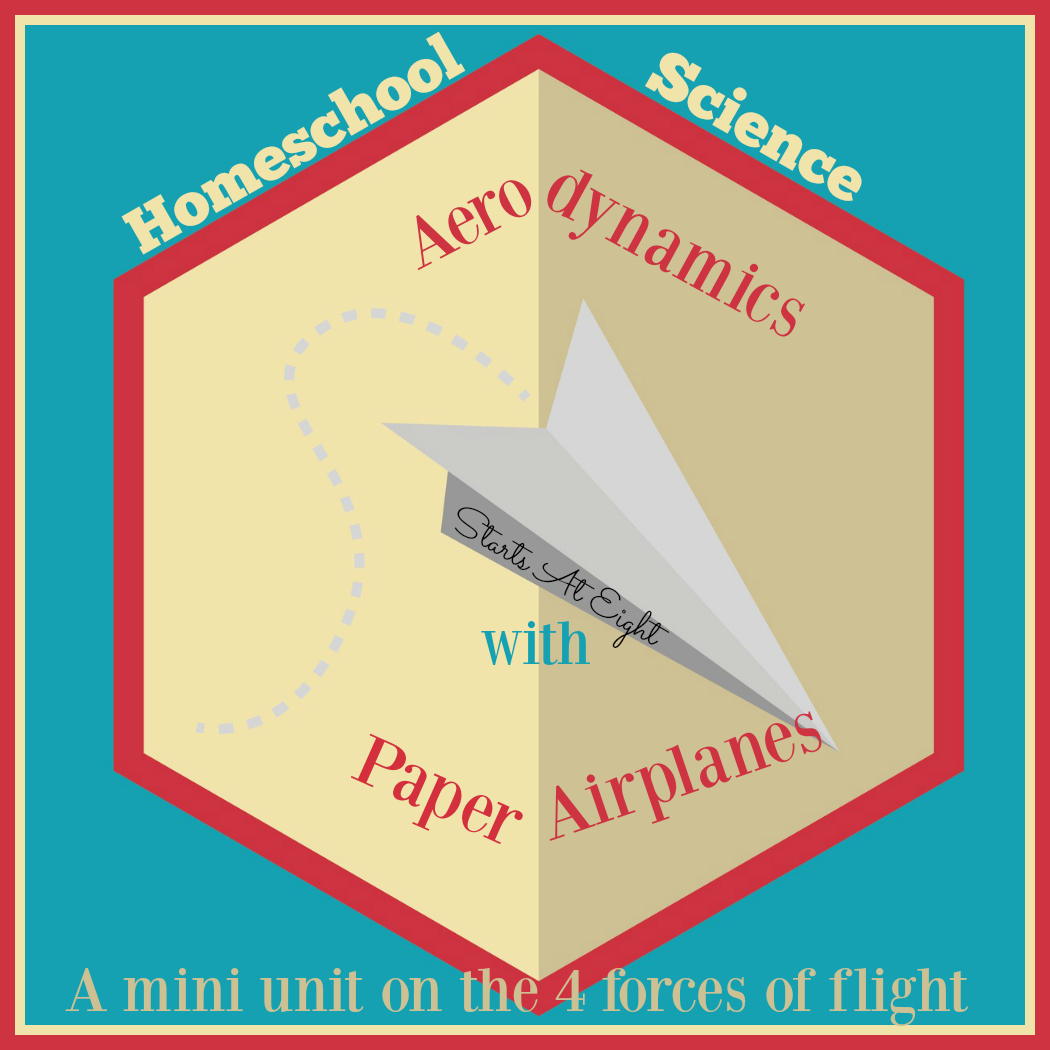 Somewhere along the way you might hear a question from your kids like, “Why do paper airplanes fly?” You can answer them with, “They fly because of four forces that affect movement on earth. These forces are thrust, drag, lift and gravity.” Then you can check out the following books, videos, information, and activities to help them better understand the aerodynamics of flight with paper airplanes.

To find our more, check out this article: What is Aerodynamics? from NASA. 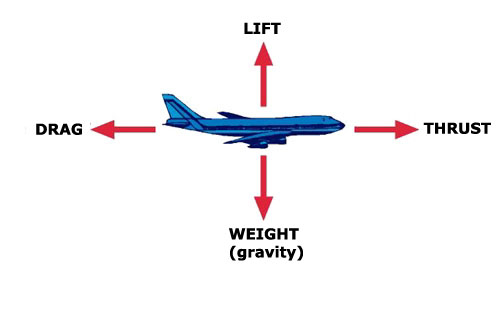 For a more in-depth explanation check out this article: Four Forces on an Airplane 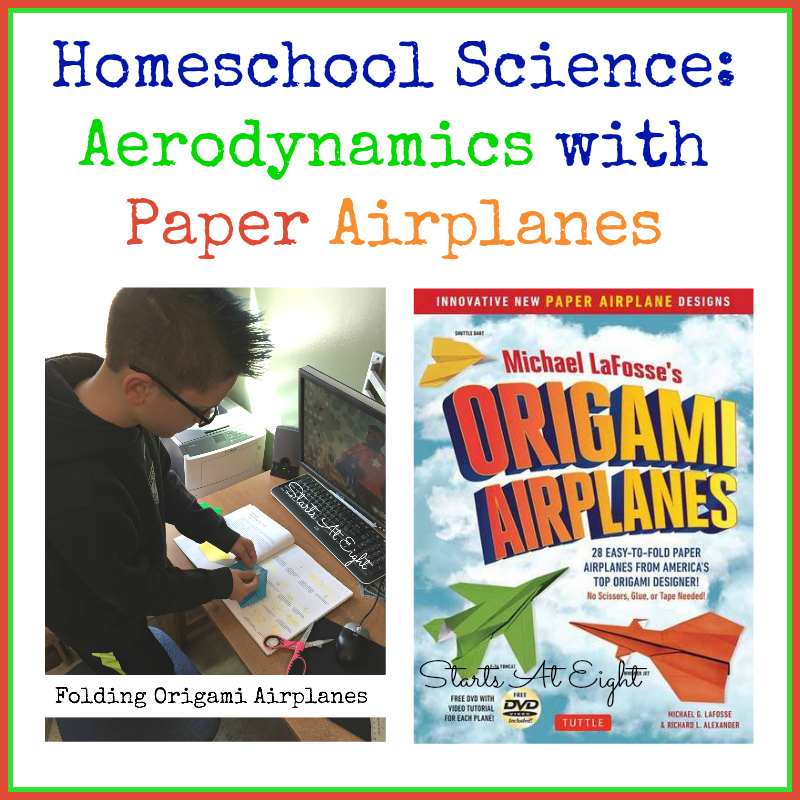 To get us started my son found a book in a catalog that he just HAD to have! Michael LaFosse’s Origami Airplanes jumped right out at him and he was so excited to give it a try! 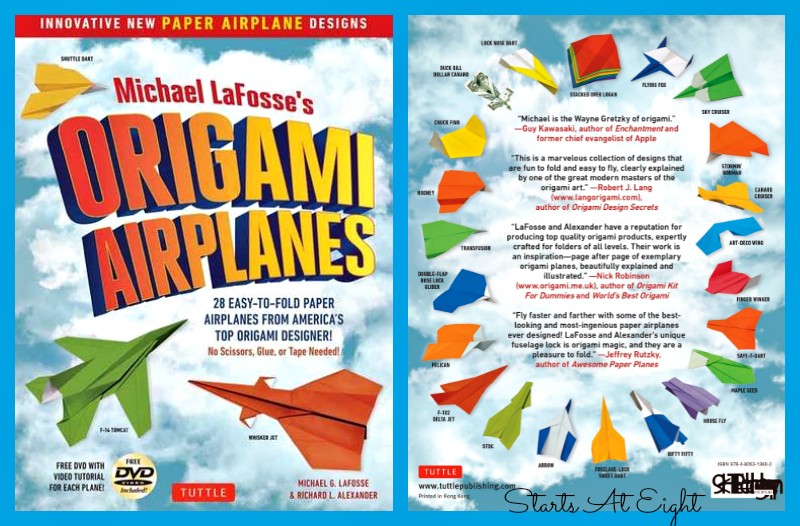 {Disclosure: I was given a copy of  Michael LaFosse’s Origami Airplanes for review.  While I received this book free of charge in exchange for my review, my opinions are my own and have not been influenced in any way. Your experience may vary. Please see my full Disclosure Policy for more details.}

I was a little apprehensive about the origami part because I don’t have origami paper on hand for him to use. So I was thrilled to find out that this book often makes planes of standard printer paper size, and when they don’t, they have provided simple instructions to cut your own! We had colored printer paper that we easily cut into squares when needed.

While you can use plain printer paper in its original size or cute to different dimensions, it is fun to have origami paper pre-cut and in a variety of colors!

Included in the book: 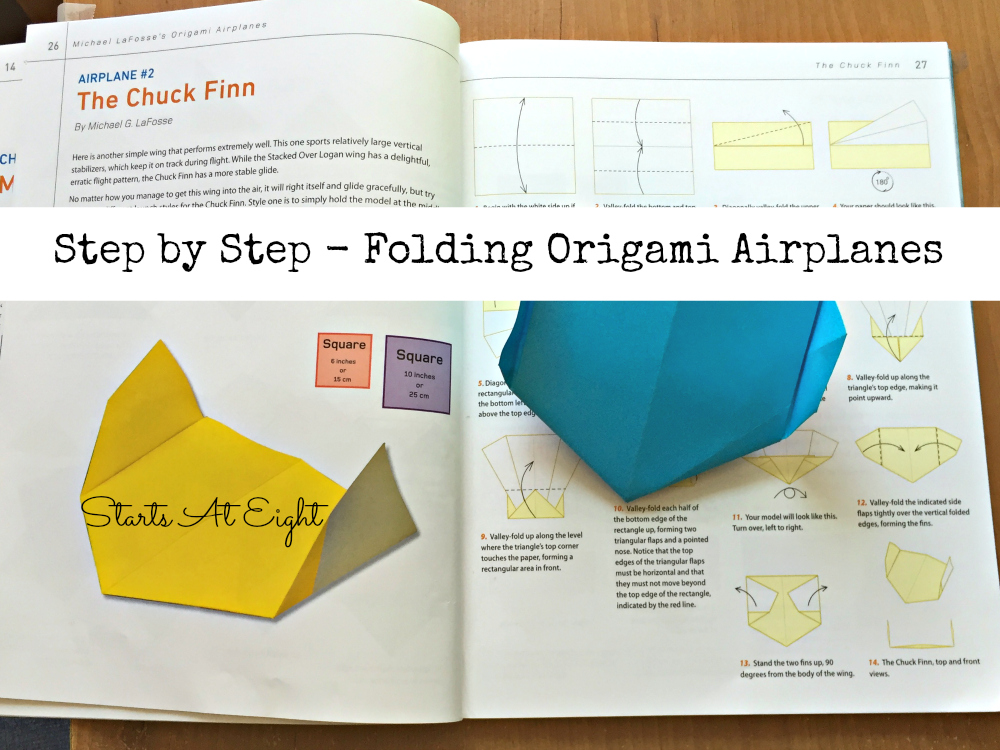 Michael LaFosse’s Origami Airplanes – is a great way to have fun, and explore the science behind aerodynamics! There are planes to make ranging from simple to more difficult so you can start out easy and work your way up! It got us up and out! Trying new ways to throw them, talking about the effects the wind was having on it, and more!

The Book of Forces – Besides enlightening and down-to-earth explanations, you’ll find plenty of detailed exercises demonstrating how the concepts and formulas can be applied to real-world situations. Knowledge of high school algebra is sufficient to follow the calculations.

Kids’ Paper Air Plane Book – Written and designed for younger paper pilots, it has simpler planes with brighter, bolder graphics; games, activities, and fun aviation facts (the “A=Alpha, B=Bravo” pilots’ alphabet, for example); and everything kids need to fold and fly. They will learn how to design their own planes, do stunts, and build a 3-D airport with stuff found around the house, and they’ll discover that the largest aircraft ever flown wasn’t a plane at all.

Understanding Flight – This practical guide is the most intuitive introduction to basic flight mechanics available. Understanding Flight, explains the principles of aeronautics in terms, descriptions, and illustrations that make sense–without complicated mathematics.

The Illustrated Guide to Aerodynamics – This unique introductory guide, proves that the principles of flight can be easy to understand, even fascinating, to pilots and technicians who want to know how and why an aircraft behaves as it does. Avoiding technical jargon and complex calculations, this book demonstrates how aerodynamic factors affect all aircraft in terms of lift, thrust, drag, in-air performance, stability, and control. Readers also get an inside look at how modern aircraft are designed-including all the steps in the design process, from concept to test flight and the reasoning behind them. 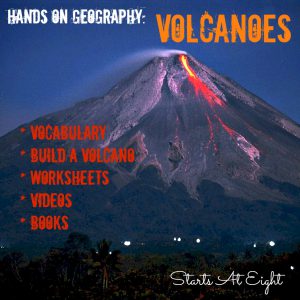