This is the second section of my High School Literature List series. In the first one I covered American Literature. This one will cover World, including British literature choices for high school and beyond. 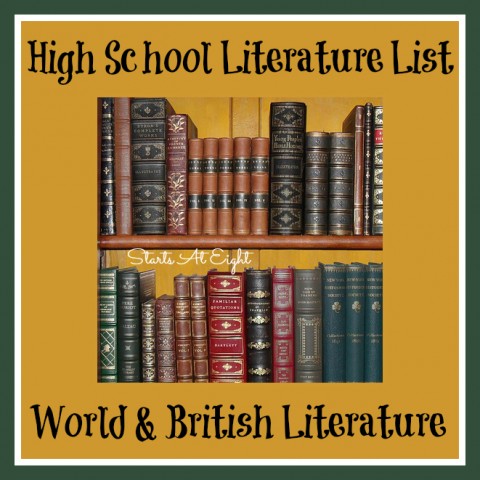 Please keep in mind that these are just suggestions and I have not even read all of these myself. When choosing books for your children to read it is a decision that is personal to each family. Be sure to screen books to be sure you are happy with the content.

Also keep in mind that not every book can be read. It is my suggestion that when choosing high school literature options you choose from a vast array of styles and genres to give your student a good cross section of literature as their base. Then after high school (or even during) they can move outward in whatever direction they would like to read, delving deeper into a particular style, author, or time period.

The Count of Monte Cristo
The Three Musketeers

The Chronicles of Narnia

Pride and Prejudice
Sense and Sensibility

The Hobbit
Lord of the Rings (trilogy)

Are there books that you thought of or have read that you think belong on this High School Literature List? Share with us in the comments!

‹ Why Take a CLEP Exam? › Second – Third Grade Back to Homeschool Giveaway