Learn Something….keeping details to myself 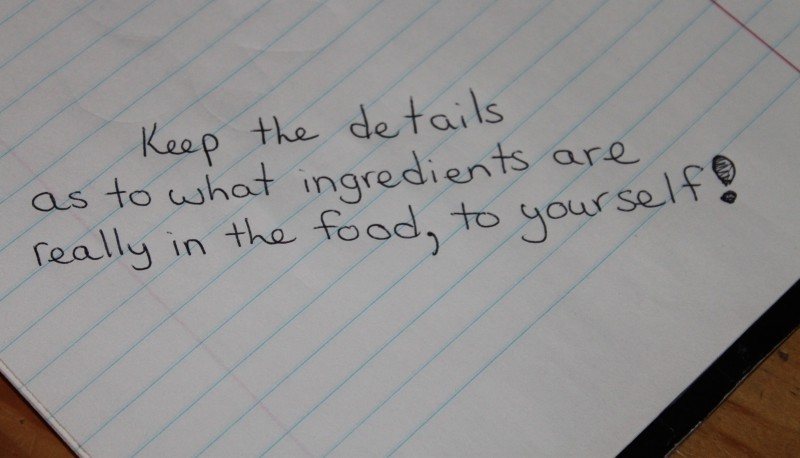 It has come to my attention that if the children say they like something, don’t knock it!  While seated at the dinner table we had two different kinds of stuffed rigatoni to choose from.  One was a green noodle, which Chloe instantly complained about.  The second, a regular “white” colored noodle.  I insisted that each of the children at least have one of each.  Upon tasting them, Chloe decided that both were surprisingly “ok” and she did not favor one over the other.  Jayden said he liked the “white” noodle better than the green.  Ava was unclear about her preference.  She ate each one quickly, but did not want more of either one.  In truth, she just wanted to eat fast so she could get down and go back to watching her new favorite show, Dinosaur Train.

My point in this story is about what I chose to say at the end of this meal.  I asked the children if they wanted to know what was really in the rigatoni.  Of course, they obliged and asked me to tell them.  Chloe yelled out, “There is spinach in the green one!”, before I could even speak.  Ding, ding, ding!  Yes, green equals spinach.  The “white” one contained portabella mushrooms, which by the way, everyone in my family but me, HATES!  Chloe took the news just fine.  Jayden, on the other hand gagged and proceeded to put his hand in his mouth like he was going to empty it of it’s contents!  “Seriously?”, I say.  “You just went on and on about how you liked the “white” ones better!  Now you are gagging!”.

The moral of the story is…..next time I will just be content with the fact that they ate the meal served to them without too much complaint!