Knitting – From the Beginning

For those of you that really know me, you know that I don’t sew, use a sewing machine, crochet, cross stitch, needlepoint or anything else crafty or involving cloth!  That was until the fall/winter of 2008.  Chloe was involved in a home school Waldorf-like program called Lilac Children’s Garden where one of the things they were looking to do was knit.  They started out finger knitting in her class.  As time went on they made their own wooden knitting needles.  Chloe was so proud of them!  Of course then came the actual knitting.  The problem was that Chloe felt like there was not enough time spent knitting.  Getting extra,  experienced hands to help the children learn to knit can be difficult.  That coupled with the fact that we were looking at not returning the following year, led me to look for other ways to fill in the gap she would have from the things she loved about LCG.

My knitting journey started at a free, 2 night class at our local library.  It turns out that getting enough experienced hands to be able to teach adults to knit can be difficult as well.  I was able to learn to cast on and do a basic knit stitch. The problem is that if you don’t use something enough, you lose it.  By the time I had knitted a bunch of rows, I could not remember how to cast on and I never did learn how to bind off!  Being the semi-internet savvy person that I am, I went searching for other ways to teach myself to knit.  It turns out that YouTube is a great educational resource.  I found all the knitting videos I could ever want on YouTube.

With casting on, binding off, a basic knit stitch and a purl stitch under my belt, I decided I could start helping Chloe out.  Her and I spent some time knitting and she gained more confidence in her skills.  Our big problem was that every mistake she made, I did not know how to fix!  Even now I have not solved that problem as I am still incapable of fixing any dropped stitches or errors that might occur.  I did however decide to tackle knitting a hat! 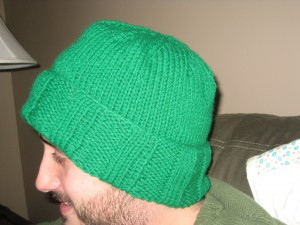 At the time I was doing all of this knitting, Chloe was still in Girl Scouts and looking ahead to Bronze, Silver, and Gold Award projects.  We thought she might want to learn how to knit a hat herself, then take on a project to teach other troops to knit and gather the hats to donate to the NICU.  Needless to say her troop dissolved and she lost her enthusiasm for Girl Scouts.  I, on the other hand, was on a mission to finish my hat.  Many hours, starts and stops later I finished my first hat!  You would have thought I saved the world!  What an accomplishment for anti-handwork me!  In the end I gave my first hat to my mother-in-law who said she would like to have it.  Hopefully she really does like it and use it!

I am currently working on a dark blue one for Jayden.  Then Chloe says she would like one as well! 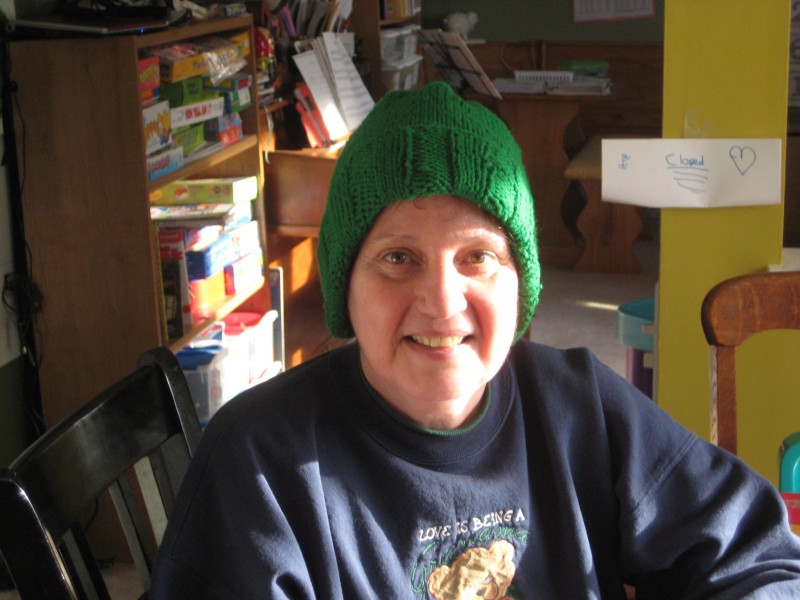